Cold wave across country likely to intensify this week 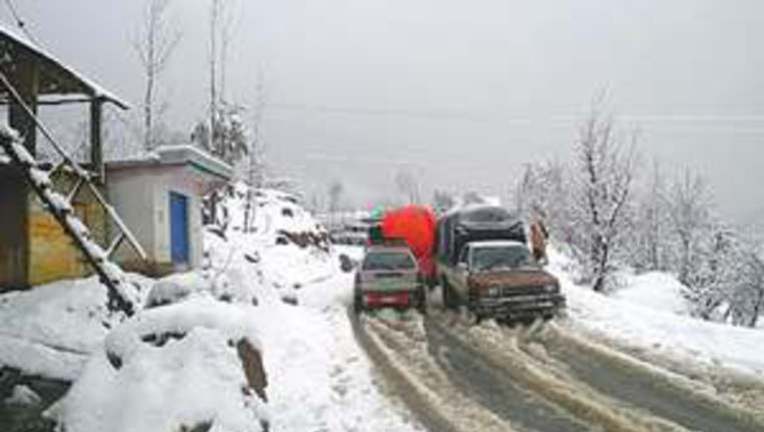 LAHORE: The severe cold wave in most parts of the country is expected to intensify over the next few days. Vast swathes of Balochistan, Khyber Pakhtunkhwa, Gilgit-Baltistan and Azad Kashmir may brace for potential flash floods in the tributaries of the Kabul River, avalanches and mudslides due to heavy snowfall and widespread rain and sleet.

The causative westerly winds, the weather system behind winter rain and snowfall, are expected to build up over the next two days, according to the Met Office.

Quetta and Dir were the most affected as they received 40mm of rain each on Monday-Tuesday. The Met department recorded 10 inches of snowfall in Kalam, six in Malamjabba, two in Murree and one inch each in Chitral, Skardu and Astore. With the temperature plummeting to -7°C on Monday-Tuesday, Skardu was the coldest place in the country.

Our correspondent from Quetta adds: The Provincial Disaster Management Authority has issued an emergency alert in Balochistan and Chief Minister Sanaullah Zehri has directed the relevant departments to drop emergency relief items to the areas affected by the persistent rain lashing Quetta and several parts of the province on Tuesday.

A woman was killed and two others were injured when the roof of a house in Zhob caved in. Over two dozen mud-houses in the Khaliqabad area of Kalat district have been damaged.

Three vehicles were swept away in a heavy flood that occurred in seasonal streams in Chaman. However, locals rescued at least 12 people travelling in those vehicles.

Our correspondent from Gilgit adds: Skardu has been facing a severe power shortfall and water shortage for five weeks, while more snowfall is expected in the area on Wednesday-Thursday.

Piercing cold winds and heavy snowfall continued for the third day in Shangala district. Main roads in the district have been snowed up, while Besham city has been facing a power blackout for two days.

Moderate-to-heavy snowfall has been forecast for Quetta, Zhob and Kalat divisions and heavy snowfall for Chitral, Shangla, Naran, Kaghan and Hazara divisions on Wednesday and Thursday.

Our correspondent from Peshawar adds: A recurrent spell of rainfall in the plains of Swat and heavy snowfall in its surrounding mountainous areas dropped mercury to as low as minus four degrees in the valley.

Meanwhile, the Met Office has said that north-eastern Punjab will be affected by the weather system over the next two days. It covered eastern Punjab on Tuesday, bringing light rainfall to Lahore and other towns. Sindh will experience isolated light-to-moderate rainfall during the period.

Our correspondent from Islamabad adds: The Met Office has forecast intermittent heavy snowfall in Murree and Galiyat till Thursday. However, the National Disaster Management Authority has issued a warning to people planning to travel to these areas to enjoy the cold weather.