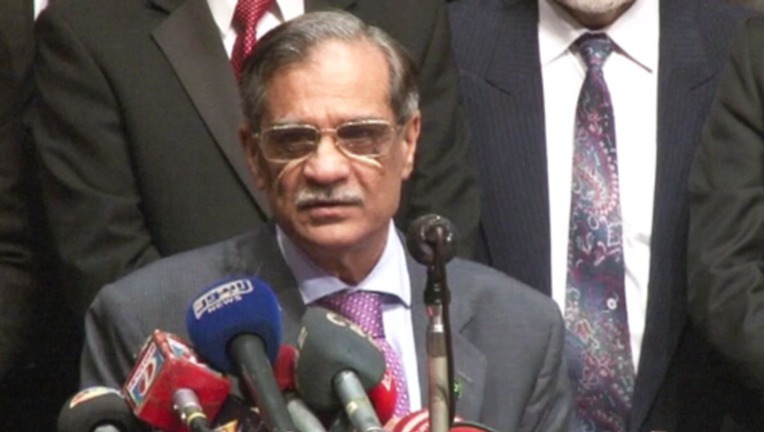 Chief Justice of Pakistan (CJP) Mian Saqib Nisar on Tuesday ordered The News and Urdu daily Jang to publish a clarification explaining why the newsgroup failed to run a correction regarding a news story that appeared in the newspapers on Monday claiming the CJP wanted Shahbaz Sharif to be the next prime minister.

The CJP on Monday took notice of a "fake news" story published in The News and Jang dailies titled "Wants Shahbaz Sharif to become prime minister", attributing the quote to Justice Nisar.

He had ordered the chief editor and publisher of The News and Jang, Mir Shakil-ur-Rahman, to appear in the Supreme Court (SC) today; however, the Jang group's chief editor failed to do so.

Justice Nisar asked Qayyum Siddiqui, who was representing Rahman in court today, why a correction had not been published despite the court's earlier order.

Siddiqui responded that he had conveyed SC's order to the chief editor and was not aware why the papers did not run a correction.

"They [the Jang group] must publish a clarification [explaining why a correction was not published] just like they published the original story," the CJP told Siddiqui.

The CJP warned that if the group fails to publish a correction, he would order Sindh and Punjab's inspector generals of police to produce Rahman in court.