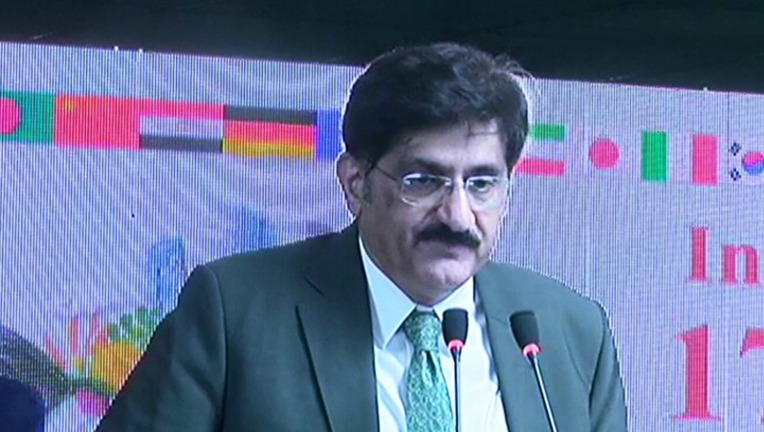 Sindh Chief Minister Murad Ali Shah on Friday vowed that he would not let the "bad times return" to Karachi a day after an improvised explosive device blast killed one person and left 10 wounded.

The blast caused substantial damage to property, including vehicles, in the area. Footage from the site showed a vehicle belonging to the Pakistan Coast Guards was also damaged in the blast.

Last night, Administrator Karachi Murtaza Wahab had quoted healthcare workers at the city's Jinnah Postgraduate Medical Centre (JPMC) as saying most of the injuries were caused by "ball bearings".

In a speech at an event in Karachi today, the CM Sindh said that the single fatality was a of 24-year-old medical student. "He was a medical student enrolled in a programme at the Jinnah university."

Out of the 10 people who were injured in the attack, Murad continued, eight were discharged last night, while the remaining were out of danger. Earlier reports had said there were nine injured.

Shah vowed that the government would track down terrorists in "every area and locality of Karachi and "eliminate them", asserting that even a single murder in the province is unacceptable.

The incident comes less than a month after a suicide bombing at Karachi University's Confucius Institute killed three Chinese academics and their local van driver. The outlawed Balochistan Liberation Army (BLA) had claimed responsibility for the attack.

Talking about the perpetrators behind the Karachi attack, Shah said: "Some days they say it's the Baloch [behind the attacks], some days it's an organisation from Sindh. I strongly believe that terrorists have no religion or language. They aren't Pakistanis. Or even humans."

He was apparently referring to reports that the the terror incident in Karachi was claimed by the Sindhudesh Revolutionary Army (SRA), though he did not mention the group by name.

"These people attacked teachers and a 24-year-old student. Who are they? They cannot be humans," he stressed, referring to both the terror incidents of KU and Saddar.

The minister recalled that Karachi had seen a "very bad" time and vowed, on behalf of the Sindh government and the people of the province, that "I won't let that time come back".

After 2013, he continued, peace and stability had returned to Karachi. "Today, the city is on a better place in the crime index. The entire nation collectively fought against terrorism."

Shah also said that Prime Minister Shehbaz Sharif wanted to revive the National Counter Terrorism Authority (Nacta) as it had become non-functional, stressing that terrorism was a "cross border" issue. He further highlighted that people had to, once again, fight terrorism together.