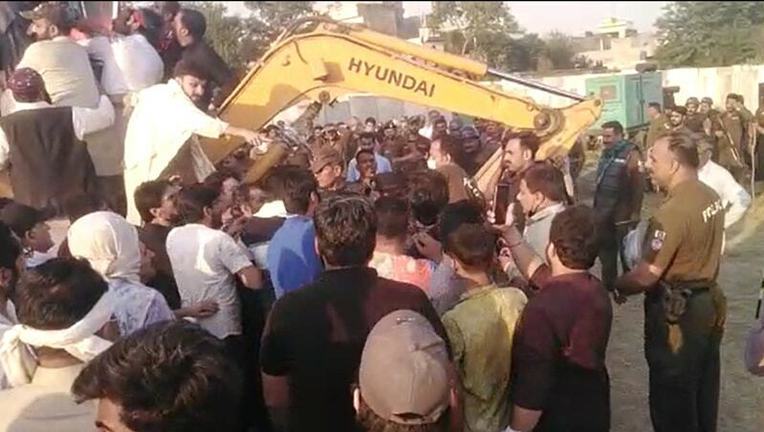 Authorities stopped PTI members from making arrangements for a rally in Sialkot's CTI ground on Saturday morning, with DawnNewsTV reporting that law enforcement resorted to measures like tear gas and baton-charge to disperse party activists who were resisting the move.

The rally was scheduled to be held later in the day.

Television footage showed police personnel at the venue, as people stood atop a stationary crane in what appeared to be an attempt to prevent police from dismantling structures erected in preparation of the rally. Clouds of tear gas could also be seen in the footage.

Sialkot DPO Hasan Iqbal, who was present at the site, told media persons that the local Christian community had objected to holding a rally at the ground, saying that it was their property.

"As you know we are right now standing on a ground that belongs to the Christian community. They had filed a writ [petition] in the high court, asking that no political rally be held on the grounds," Iqbal said, adding that the high court then directed the Sialkot deputy commissioner to listen to both parties and decide the case.

He added that the "political party's leaders" sought permission to hold the rally but the community had refused.

He said the deputy commissioner had also provided alternatives for holding the rally. "We made it clear that we are not against any political activity. Holding a rally is a legal and constitutional right. But forcibly holding a rally on a property belonging to a minority community without any due process would not be appropriate," DPO Iqbal said.

"Then we came here and told them that we can help you with regards to an alternative venue. What has happened after that is there for you to see."

He said it was "not our mandate to make arrests or stop the rally". Our mandate is to implement the deputy commissioner's directives, which was made according to the law, after the high court's order".

To a question about containers being placed to block roads, the DPO said the "political party" had requested for space for parking. "We have not blocked any roads," he maintained.

Meanwhile, there were also reports of the arrest of PTI members but no immediate official confirmation.

When asked about the matter, the DPO did not give a definite answer saying that information about this would be given in an official version.

He went on to say that "police had not done anything in the ground and it is the vendors who are clearing it".

But the PTI claimed in a tweet that multiple party members, including leader Usman Dar, had been taken into custody.

In a video statement, Dar claimed that he was speaking from a "prison van" after his arrest from the ground.

"They believe that our love ... for the captain can be contained by putting us in this prison van or jail. Hear me: throw us in jail, we will come out and again continue the movement for freedom, will again hold a rally. This storm is not going to stop. This passion will not die down," he said, adding that "we are standing with Imran Khan".

Dar added: "We will bear imprisonment but remain loyal to our leader Imran Khan. And listen closely, we will come out of the jails and again hold a rally in Sialkot. Our leader will again come to Sialkot. And under the leadership of Imran Khan, we will bury this imported government, these puppets of America forever," Dar said.