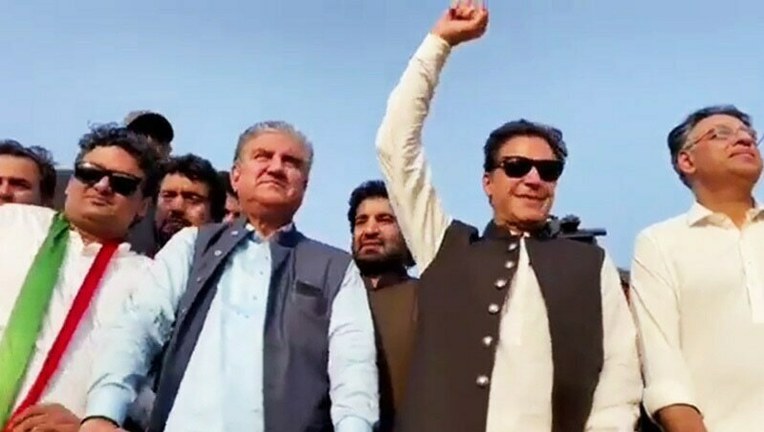 Government ministers and mouthpieces on Thursday claimed that former prime minister Imran Khan "has run away after spreading chaos" in the country as PTI protesters at Islamabad's D-Chowk began dispersing after he gave the government a six-day deadline to call elections failing which he would "return" to the capital.

In a tweet today, Railways Minister Khawaja Saad Rafique said "Imran Khan ran away after spreading chaos in the country."

He said that the government had fulfilled its responsibility to stop the unrest and was now looking upon the state's most important "pillar" for justice. He was referring to the government's petition in the Supreme Court seeking contempt proceedings against Imran Khan for "violating" court orders with regard to the Azadi March.

"The nation is watching [to see] how saboteurs and their masterminds who take undue advantage of court orders are treated. I have heard that justice is blind."

After Imran's speech, Dawn.com spoke to police officials who said he departed after he gave the government a six-day deadline to call elections failing which he would return to the capital with the protesters. Dawn.com was also able to confirm that the protesters have started dispersing from D-Chowk.

Main roads in the capital such as the Srinagar Highway and Blue area have also been reopened. A PTI supporter, who was present at the site, told Dawn.com that he was "caught by surprise" when Imran Khan "decided to conclude the march".

Another supporter who was at D-Chowk and declined to be named told Dawn.com that he was not disappointed and would return at a moment's notice if their leader called them back. He also said he had brought food supplies for 10 days in case the sit-in lasted that long.

Imran and his caravan reached Islamabad late Wednesday night and broke through the barriers and braved police shelling to enter the Red Zone. They subsequently dispersed from the area after negotiations with the police.

A little before 8am, the PTI chief addressed his supporters and said that he had decided that he would sit at the D-Chowk until the government dissolved assemblies and announced elections.

"But of what I have seen in the past 24 hours, they (govt) are taking the nation towards anarchy," he stated, claiming that the government was trying to create a divide between the nation and police. Imran added that the government would be happy if he staged a sit-in in Islamabad as it would lead to clashes between the people and police and the army.

He asserted that the date of elections would be decided by the government, along with its coalition partners and suggested to the former prime minister to exit politics. "Imran Khan has pushed the PTI to a dead end. He has fallen into the pit he dug for others.

"Imran's politics have faded into the past," Tarar added.

He also promised that the government would register cases against the vandals and arsonists at various places. "The arrests will happen. Cases will also be registered against people who attacked police officers in Gilgit-Baltistan."

Separately, Interior Minister Rana Sanaullah, in a statement on Thursday, said that the PTI chairman "misled" the Supreme Court by "promising" to hold the sit-in at the court-designated place in H-9. "But he broke his promise by announcing to go to D-Chowk.

"Metro bus stations were set on fire, trees were set on fire and the nation saw it all," he went on. "Hiding behind the apex court's decision, the mob continued to create unrest all night. All night, Imran sat on the container and defied the Supreme Court's order."

The minister also clarified that the police never fired a rubber bullet at the protesters and dismissed such complaints as "propaganda". "Eighteen Rangers and police officers were injured," he said, lauding the security personnel for protecting the lives of the public by firing tear gas at the rioters.

Sanaullah demanded that the top court should give "clear orders" now to ensure the "writ of the state" and protect the Constitution so that the protesters could be expelled from Islamabad and the safety of the residents could be restored.

However, the PTI insists that disproportionate force was used against them, and Imran claimed today that at least five people had died in clashes. On Thursday morning PTI leader Omar Ayub tweeted that he was en route to Islamabad after facing police at the Burhan Bridge, where he was attacked with batons.

Last night, while Imran's convoy, which began the journey from Swabi's Wali Interchange, was en route to D-Chowk via the Srinagar Highway, a batch of his party workers and supporters were already present at the planned destination in the face of intense police shelling.

According to Islamabad police, eight personnel of police and seven of Rangers had been injured as protesters hurled stones.

When PTI's Azadi March had begun, tensions in Punjab, too, had risen after police made use of tear gas and arrested several PTI marchers in cities across the province as activists attempted to remove shipping containers blocking routes to Islamabad.

A five-member bench is hearing the petition which was filed by Attorney General Ashtar Ausaf.

On Wednesday, the apex court had ordered the federal government and the PTI to constitute respective negotiating committees and meet at 10pm on Wednesday to finalise modalities for a peaceful and safe conduct of the party's long march to the capital.

However, negotiations were not held as both sides claimed the other had not shown up.

The SC's order had come on Shaheen's petition which was heard by a three-judge bench consisting of Justice Ijazul Ahsan, Justice Munib Akhtar and Justice Sayyed Mazahar Ali Akbar Naqvi.

The authorities were also told to release the PTI workers and supporters arrested in the last 48 hours but not involved or accused in any heinous crime. The court also restrained the authorities from midnight raids at residences, offices and private properties for rounding up PTI workers till further orders.

The authorities were also told to release the PTI workers and supporters arrested in the last 48 hours but not involved or accused in any heinous crime. The court also restrained the authorities from midnight raids at residences, offices and private properties for rounding up PTI workers till further orders.