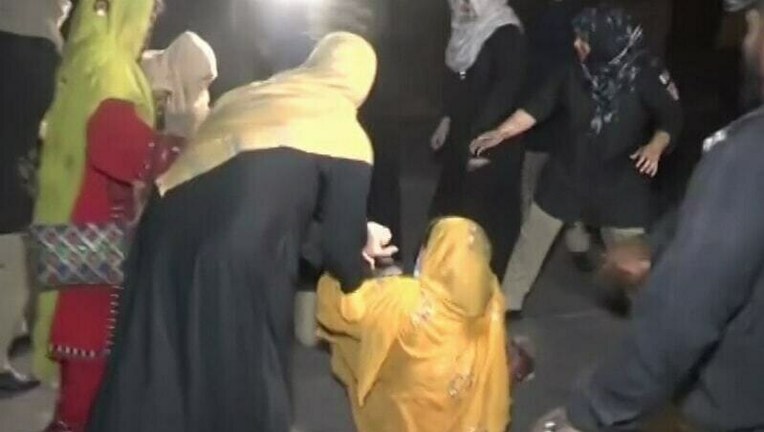 After peaceful Baloch protesters in Karachi were manhandled and detained by the police from outside the Sindh Assembly late Monday night, almost unanimous condemnation poured in, with journalists, analysts and politicians from across the political divide criticising the violence.

Several videos making the rounds on social media showed the police manhandling and forcefully dispersing them. Around 28 of them were detained.

On Sunday, approximately 120 to 130 people, including women, took to the streets near the main gate of the Sindh Assembly against the alleged abduction of two Baloch students of the University of Karachi (KU) by law enforcement agencies.

The two students of KU’s Philosophy Department — Doda Baloch and Ghamshad Baloch — were allegedly taken away from their home near Maskan Chowrangi in Gulshan-i-Iqbal on June 7 and their whereabouts are unknown since then.

Their relatives and members of civil society organisations had set up a camp outside the Karachi Press Club (KPC) for the last four days. On Sunday night, they managed to reach the Sindh Assembly's main gate where they staged a sit-in for the release of the missing students. Police and district administration held talks with them, persuading them to vacate the place as the provincial legislature’s budget session was scheduled to be held.

South-SSP Asad Raza told Dawn that the police detained 19 men and nine women as they tried to enter the assembly building.

In a tweet late night, Rehman condemned the Sindh police for their "shameful role" and "disrespect" towards Baloch women. "On June15, we will hold rallies across Balochistan," he said, instructing the members of his movement to organise peaceful demonstrations in every city of the province.

"I want every citizen of Balochistan to participate in it without any discrimination," the JI leader added.

Journalist Faizullah Khan said that there was no space for peaceful protests for the Baloch people and called the police violence a "painful tragedy".

Senator Mushtaq Ahmad Khan called the violence "shameful" and "reprehensible". "Are suo motu(s), court and immediate relief only for politician," he asked.

Qaumi Awami Tehreek president Ayaz Latif Palijo said that Sindh's land should not be used for violence against the Baloch community.

PPP Secretary General Farhatullah Babar also criticised the "use of disproportionate force and arrest of women", adding that such treatment was "highly disturbing".

Meanwhile, activist Ammar Ali Jan pointed out that the Sindh government that once raised voices against abductions was silent today.

On the other hand, activist and advocate Imaan Hazir Mazari called videos from the protest site "chilling".