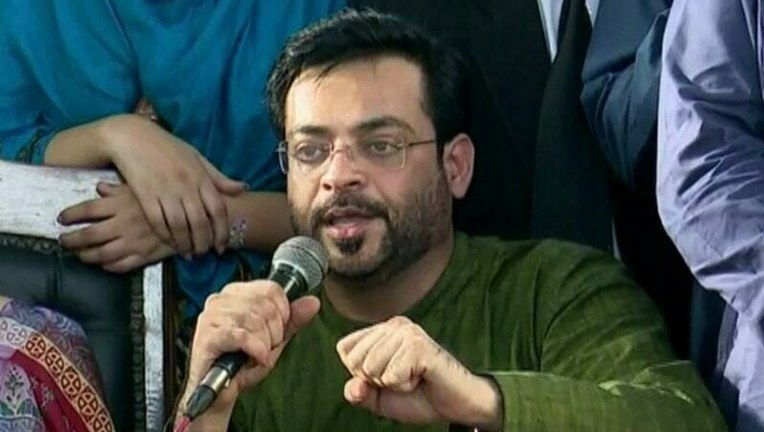 The Sindh High Court (SHC) on Wednesday restrained the police from exhuming the body of lawmaker and television personality Aamir Liaquat Hussain for a post-mortem examination to determine the "actual cause of his death".

Following Hussain's sudden death on June 9, the police had said an autopsy would be conducted but performed only a preliminary examination before relinquishing custody of the body to his family after they refused an autopsy. He was buried the following day.

Last week, a Karachi judicial magistrate had ordered authorities to conduct a post-mortem on the televangelist's body after which a six-member medical board was constituted for the purpose on June 23.

However, Hussain's children — Ahmad Aamir and Duaa-e-Aamir — filed a petition in the SHC today expressing that they were "aggrieved" and "dissatisfied" at the judicial magistrate's "baseless and meritless" order and appealed for it to be dismissed.

They said that the petition for a post-mortem examination was only filed in order to get cheap and meagre publicity among the general public and nothing else. "There is no need of such exercise of post-mortem of late Dr Aamir Liaquat who has already been buried on June 10."

The petition stated that before Hussain's burial, the police and other relevant authorities were present at the Chhipa morgue, where a thorough external examination of the body was conducted.

"It found that there was no mark of violence, wound, fracture, etc., which clearly transpires that no misshape (sic) had occurred with the deceased and after completing all codal, legal, and religious formalities the exercise of burial was conducted."

It alleged that the police and the medical board misused their powers for their own whims and wishes for "certain vested interests".

The police, the family argued, was insistent on conducting the post-mortem but Hussain's first wife had repeatedly refused it on the pretext of the family's religious beliefs, adding that exhuming the body more than 10 days later would be disrespectful towards the deceased.

Subsequently, at the hearing today, a two-member bench, comprising Justice Junaid Ghaffar and Justice Amjad Ali Sahito, suspended the judicial magistrate's orders and issued notices to the police, health authorities and the magistrate.

Hussain, 50, had passed away at his house in Karachi's Khudadad Colony earlier this month.

Police had told Dawn at the time that according to his domestic staff, he was not feeling well, but did not go for a medical checkup. His health later deteriorated after which he was taken to the Aga Khan Univ­er­sity Hospital, where he was pronounced dead.

Police said Hussain’s residence had been sealed for further investigation after a crime scene unit examined the house and collected evidence.

Separately Karachi East Zone DIG Muquddus Haider had told Dawn that there appeared to be no marks of injury on his body.

Police Surgeon Dr Summaiya Syed had told Dawn that Hussain's body was brought to the Jinnah Post Graduate Medical Centre's emergency ward around 3pm that day, and he was declared dead on arrival. While the body was shifted to the mortuary for completion of medico-legal formalities, the family refused to have an autopsy conducted, she said.

Hussain's former wife, Bushra Iqbal, with whom he had two children, had also confirmed that his heirs, Ahmad Aamir and Duaa-e-Aamir, had refused his post-mortem.

"According to their wishes, the deceased will be taken to his last place of rest with respect," she had said in a post on Instagram.

But his burial on the Abdullah Shah Ghazi shrine grounds had been delayed by hours amid an impasse between police and the deceased's family over the matter of his autopsy.

For their part, police had initiated proceedings under Section 174 (police to inquire to report in suicide, etc) of the Criminal Procedure Code for his post-mortem examination.

The matter was settled after it was taken to a judicial magistrate, before Hussain's heirs had appeared and given their statements on the matter.

Later, police surgeon Dr Summaiya Syed along with the judicial magistrate had reached the morgue where Hussain's body was kept and the body was handed over to the heirs after a preliminary examination.

Hussain was subsequently laid to rest on the premises of Abdullah Shah Ghazi's shrine.