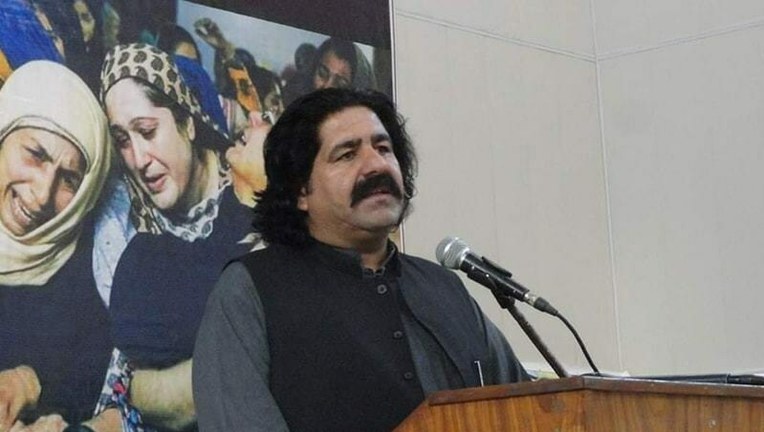 Incarcerated Pashtun Tahaffuz Movement (PTM) lawmaker Ali Wazir, who was admitted to Karachi's Jinnah Postgraduate and Medical Centre on Tuesday, has claimed that his life is in danger and demanded that he either be shifted back to Central Jail in Karachi or be taken to Islamabad to attend the ongoing budget session.

Wazir — who is facing sedition and hate speech charges in multiple cases and has been imprisoned at the Karachi Central Jail since Dec 31, 2020 — claimed while addressing PTM workers outside the hospital late on Wednesday night that he had been attacked twice at the hospital.

According to Wazir, he was first attacked on his first day at the hospital and later again on Wednesday night.

He demanded that he should be taken to Islamabad to attend the budget session since National Assembly (NA) Speaker Raja Pervaiz Ashraf had issued a production order for him.

"I should be taken to Islamabad to attend the budget session [in the NA and] raise the problems of my constituency," Wazir said.

Otherwise, he said, "I demand that I should be sent back to the jail as I feel insecure here."

The NA speaker had issued a production order for the PTM lawmaker on Tuesday to attend the ongoing budget session, but Wazir has so far not been shifted to Islamabad.

Wazir also claimed that he had submitted an application with jail authorities for his medical treatment three years ago, but he was never shifted to a hospital until Tuesday.

But now, he said, he was shifted to a hospital so that he could be barred from attending the budget session.

"This is a session during which lawmakers raise problems being faced by the people of their constituencies," he said, adding that his demand of being shifted from the hospital was not "illegal".

The PTM lawmaker wondered why he was being barred from attending the session when he had not been involved in any act of terrorism or committed corruption.

Later, PTM leader Muhammed Sher Mehsud told Dawn.com that Wazir sat outside the hospital in protest as he was not allowed to meet relatives, friends and his party's workers there.

"He started his protest at 4pm on Wednesday," Mehsud said, adding that for Wazir, the "atmosphere at the hospital was suffocating as he had been asked to stay bed-ridden".

Mehsud said later officials from court police and police held talks with Wazir till 2am on Thursday and agreed to shift him back to the prison today.

Wazir was shifted to the hospital for physiotherapy," Mehsud added.

Earlier, a police official also confirmed to Dawn.com on condition of anonymity that Wazir had "abandoned his hospital bed on Wednesday evening and sat outside the hospital in protest".

"Later, he called on PTM workers and spoke to them there, expressing fear for the safety of his life," the official said, adding that negotiations between Wazir and court police, jail officials and district police had continued till Thursday morning.

The official said the talks were "successful" and it was decided that Wazir would be shifted to the prison today.

Regarding the purported attack on Wazir, the official denied the claim and said neither the lawmaker nor "any of his friends from the PTM have lodged any complaint to the relevant police station to this effect".