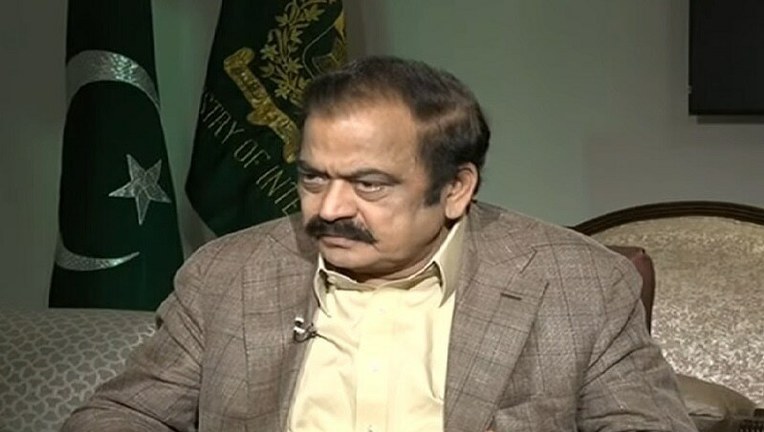 Interior Minister Rana Sanaullah on Thursday said there was no possibility of discussion with the proscribed Tehreek-i-Taliban Pakistan (TTP) on the withdrawal of the military from tribal areas near the Afghan border, and reversal of the Fata merger, explaining that such demands were against the Constitution.

The National Assembly had on May 24, 2018 passed a constitutional amendment, paving the way for the merger of the region formally known as the Federally Administered Tribal Areas (Fata) with Khyber Pakhtunkhwa.

In an interview for the Samaa TV programme Nadeem Malik Live, Sanaullah said the talks were possible with those willing to surrender arms.

When asked about the strength of the TTP fighters, the minister said the "TTP fighting force" comprised 4,000 to 5,000 members.

"The names associated with the APS (Army Public School) incident can never be considered for a pardon," he explained.

He said that it was to be seen "what kind of people" would take part in the talks from the other side. If representatives of the political government in Afghanistan are in attendance, then politicians from our side will also participate in the discussion, he added.

The minister said he did not believe the outcome of the talks would be visible in weeks. "It will take some months," he said.

Sanaullah insisted that the civil and military leadership were on the same page that the TTP militants would not be allowed to take up arms. "Otherwise, we won't shy away from the fight".

"The military leadership assured us that we have the capacity and the power to sort these issues out effectively," the minister added.

He said the involvement of foreign elements could not be ruled out in terror attacks in Pakistan, saying there were some forces behind the TTP that did not want peace in the country.

The minister said that a security briefing given yesterday was "comprehensive" and covered all aspects of the issue but there were no "suggestive measures" in it.

Sanaullah said that guidance was sought from the parliamentary committee, and the lawmakers were told about the "repercussions" of different actions.

"The committee, in the presence of the prime minister to Asif Ali Zardari and all parties including the ANP and the MQM, had a consensus that talks [with the TTP] should be held," the minister revealed.

He reiterated that there was another consensus on holding talks under the framework of the Constitution.

Sanaullah dismissed reports claiming that there were security threats to former prime minister Imran Khan. He said PTI leader Babar Awan had raised a "hollow" concern that Imran's life was in danger.

"When we looked into it, there was no truth in these claims," the minister added.

He said another PTI leader Fayyazul Hassan Chohan had claimed Imran had been facing threats from Afghanistan, adding that the party should have conveyed the concerns to relevant agencies instead of "creating hype on the matter".

In response to a question, the interior minister said Imran would be given "proper security" if he were to canvass in Punjab as part of his party's campaign for upcoming by-elections on 20 seats of the Punjab Assembly.

However, the minister reiterated that Imran should be arrested and prosecuted for his "extremist views and violence-mongering".

He made it clear that now no one will be allowed to enter Islamabad with the purpose of a disturbing the capital's peace.

To a question about the appointment of the next army chief, the interior minister said a decision in this regard will be taken in October.

He said there was a tradition to appoint the COAS a month before his retirement "but there is also a tradition to make such announcements quite near to the expiry of the term [of the serving army chief]".

When asked about party leaders staying in London, Sanaullah said he had advised PM Shehbaz Sharif that senior party leader Ishaq Dar should return to the country.

He said he had also requested party founder and former premier Nawaz Sharif to come back to the country.