Imran threatens to 'reveal everything' if harassment of PTI workers, journalists continues 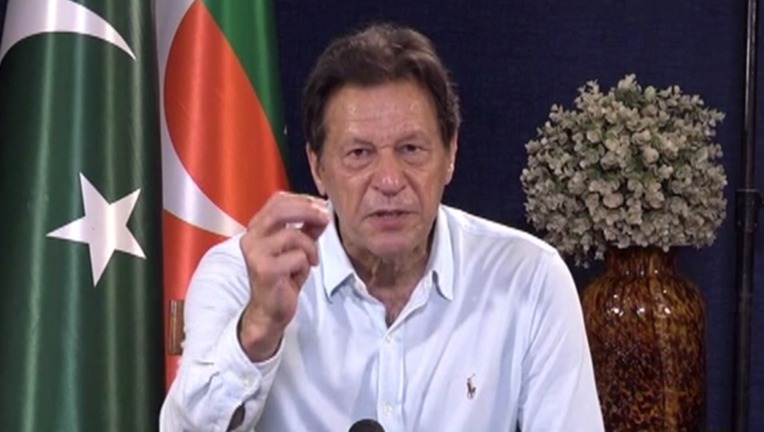 PTI Chairman Imran Khan on Tuesday threatened that he would be forced to "reveal everything" about the characters involved in the alleged conspiracy to oust his government if harassment of him and his party did not cease.

Speaking in a video message from Islamabad, he said: "If we are pushed against the wall and harassed then I will be forced to speak up and will lay bare everything before the nation about what happened."

Imran said he was "silent" despite knowing everything about "who did what" to force his ouster. He said he did so for the nation's sake so the country suffers no damage, adding: "I know how this conspiracy happened and who is involved."

The PTI chairman said that he had already made a video recording, in case anything happened to him, so the public could know "which characters did what and who committed this great betrayal with the country."

Imran had first made mention of his tape in May, when he claimed that his life was in danger and that he had recorded a video identifying the names of all those who "conspired against me".

The PTI chairman claims he was ousted from the top office by foreign powers through local players due to his pursuance of an independent foreign policy.

In his message today, Imran likened his ouster to the fall of former prime minister Zulfikar Ali Bhutto's government. He alleged that the common element in both government changes was the disapproval of the US about Pakistan pursing an independent foreign policy.

Imran lashed out at the current leaders and members of the coalition government, claiming they only cared about getting "NRO-2" and had broken inflation records — despite campaigning against inflation during the PTI government's tenure.

He added that the nation was refusing to accept the present government, pointing to the crowds coming out on protest calls by the PTI. "Whoever was involved in the conspiracy should think that people are not accepting these thieves and traitors," he added.

Imran lashed out in particular at the treatment being meted out to journalists, alleging that they were being threatened and harassed, particularly those who are seen to favour the PTI.

"I've never seen such fascism in Pakistan and the kind of fear that is being spread. I ask this question today from the nation and our judiciary, are fundamental rights suspended in Pakistan? Is there a martial law [in place]? Which constitution permits this?"

Imran also alleged that the administration was involved in rigging the upcoming Punjab by-elections and called on the people to come out and vote to ensure the PTI wins.