Search
Hapka.info: Main page » Pakistan »  Any recording made to expose crime not against the law: Rana Sanaullah

Any recording made to expose crime not against the law: Rana Sanaullah 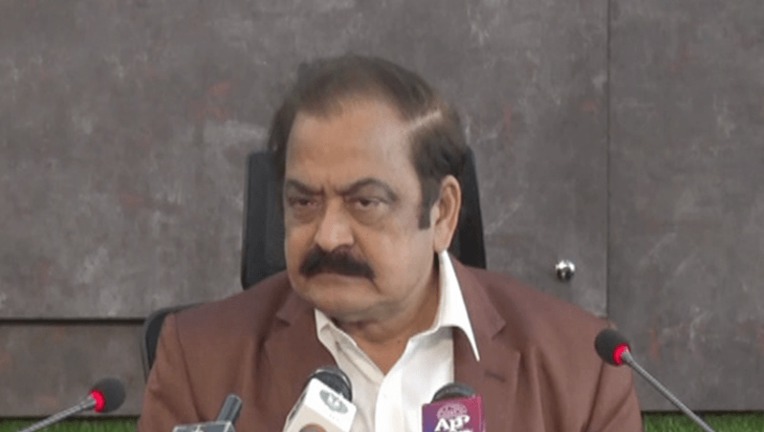 Federal Interior Minister Rana Sanaullah on Wednesday said that any recording — video or audio — made to expose a person's criminal offences or misdeed could not be considered a crime, unless it was done to blackmail someone.

"The reality is that if any recording, whether video or audio, is made to catch someone's crime, then in my view it is no crime. If it is used to blackmail someone, then it is a crime," Sanaullah said in a press conference.

"No one can even claim that it is a violation of their privacy," he asserted.

The minister's comments come as a reference to the purported audio clip of Bushra Bibi, former prime minister Imran Khan's wife, and PTI social media head Dr Arslan Khalid that has been doing the rounds on social media.

In the alleged clip, Bushra Bibi could be heard telling Dr Khalid that Imran had asked him to run trends on social media declaring political opponents as "traitors".

Dr Khalid was allegedly instructed by Bushra Bibi that these issues should not be hushed down and that trends should be generated to highlight how “Imran Khan and the country were being betrayed”.

In the purported clip, Bushra Bibi also allegedly told Arslan Khalid to link criticism against her and Farah Khan, a friend of the former first lady who flew out of Pakistan in April, with treason. As per the clip, Dr Khalid assured the ex-first lady that the social media team would follow the instructions and label the PTI critics “traitors”.

A day after the audio clip surfaced, PTI leaders Shireen Mazari and Fawad Chaudhry claimed that the phones of Imran and his family were being tapped and called the clip a breach of law.

At a press conference in Islamabad today, Sanaullah said that the audio clip proved that Bushra Bibi was "involved in a crime". "A lady of an important status is linking the entire opposition and the nation with treason over a letter, which they (PTI) claimed came from America.

"She is doing it to save herself from corruption. She is explaining how it can done with a proper procedure, with proper planning and training," he stated, adding that no questions could be raised on such a recording.

But if PTI claimed that the recording was false, the minister continued, then Imran should straight up refute it and demand a forensic examination.

"Instead, his party members say that the content of the audio doesn't matter. If the recording is fake, they should say that it is fake so that an investigation is held to prove who is right and who isn't."

Meanwhile, responding to Imran's video speech last night, Sanaullah said that the PTI chief "should be ashamed of himself" for making claims that he was being harassed and isolated.

"Have you not been doing this with your opponents for 3.5 years? No such thing is being done with you," he said. "Is asking you about your assets and corruption harassing you?"

In a message yesterday, Imran had threatened to "reveal everything" about the characters involved in the alleged conspiracy to oust his government if harassment of him and his party did not cease. "If we are pushed against the wall and harassed then I will be forced to speak up and will lay bare everything before the nation about what happened," he said.

In a rebuttal today, the interior minister stated that if the former premier had to reveal everything then he should tell the public the real reasons and factors involved behind the 2014 sit-in. "Tell them how you falsely implicated me in the drugs case. I was locked up in jail for 15 months ...

"The reality is that the case against me was made by Imran Khan himself and Shahzad Akbar proved to be instrumental in this," he alleged, demanding that the Supreme Court should initiate a suo motu case on the matter and find out who the "real perpetrators" were.

"If I am proven to be guilty, I am ready to be sentenced to capital punishment. But if the reality is something else then all of them should be sent to jail for life," he demanded.

In response to a question, Sanaullah revealed that the Parliamentary Com­­m­ittee on National Secu­rity had unanimously agreed to continue dialogue with the banned Tehreek-i-Taliban Pakistan (TTP).

"All the politicians who attended the meeting yesterday said that no one could refuse dialogue. Across the globe, every violent movement was ended on the table. So there is no denying that," he said.

Apart form that, the minister continued, the armed forces clearly said that a committee should be formed, comprising representatives of all political parties, to ensure that there was a "political consensus and will" backing the talks.

"They said that the committee will monitor this and any talk or offer conceded will first be discussed in the parliament before a decision is taken," he said, adding that the process was being held under the supervision of the parliament.

Answering a question on journalist Imran Riaz's arrest, the minister said that the government was against curbing freedom of expression but if someone was making accusations against anyone without any evidence, that was plain wrong.

"If they are talking beyond their professions and are presenting themselves as political workers, then I feel that the shelter which is enjoyed by a journalist — they can't take shelter under it then."

"Are you a rented journalist that without verifying you have started attacking us? What benefits are you gaining out of it?" he said, urging journalist organisations to take notice.