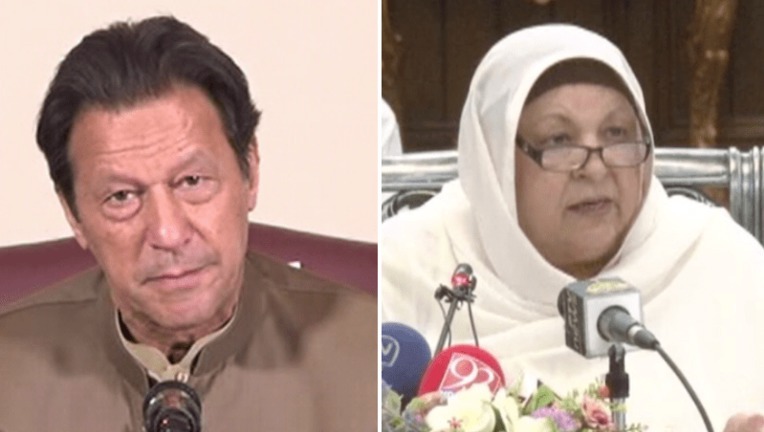 The petition, which was filed by Advocate Mian Dawood on behalf of citizen Akhtar Ali, will be heard by Justice Mohammad Sajid Mehmood Sethi tomorrow.

The petition, a copy of which is available with Dawn.com, noted that “a designed malicious campaign against the state institutions on social media i.e. Twitter, Facebook, Instagram, TikTok, YouTube, etc is strictly prohibited in the Constitution of Pakistan, Pemra Ordinance 2002 and Peca (Prevention of Electronic Crimes Act) 2016.”

Imran and “several members of his erstwhile federal cabinet as well as Punjab provincial cabinet have started a targeted campaign on social media as well as on electronic and print media against state institutions including the judiciary, ECP (Election Commission of Pakistan) and armed forces on the assumption that the state institutions are actually behind the ouster of the PTI from government benches,” it stated.

“The PTI chairman and his political cohorts are continuously issuing various unfounded, provocative, highly defamatory and derogatory statements in public interviews, political rallies or through various other means, in both print and electronic media, including social media, which are designed and calculated to tarnish the public image and severely harm the good reputation of the state institutions.”

The petition referred to a clip shared by the PTI’s social media accounts in which Dr Rashid “defamed, disrespected and blamed the state institutions, especially ECP and armed forces by stating that the state institutions … are planning to rig the by-elections scheduled to be held on July 17 on various seats in Punjab without giving any proof which is against the Constitution, Pemra Ordinance 2002 and Peca 2016”.

The PTI’s official social media accounts were being used for the malicious targeted campaign, the petition claimed, adding that Azhar Mashwani, the former focal person for digital media in Punjab and anchorpersons Imran Riaz Khan and Arshad Sharif, among other people, were involved in the campaign.

The malicious content was available on social media platforms due to the inaction of state functionaries, it added.

“Such nefarious campaigns on social media … create an atmosphere of harassment and nuisance among the public all over the country and degrade the respect and honour of the nation of Pakistan in the eyes of the other nations and countries of the world.”

The campaign had harmed the Pakistan Stock Exchange (PSX) and created economic hurdles for the business community in dealing with other businesses around the world, it stated.

The petition requested the court to issue directions to the state functionaries — the federal and Punjab governments, PTA, Pemra, FIA and IGP Punjab — to immediately remove the “unfounded, provocative, defamatory, derogatory content being spread on social media against state institutions”.

It also asked the court to direct that action be taken against all people, including the social media activists mentioned in the petition, for being part of the campaign.

The court was also requested to issue directives for a detailed inquiry into the videos and for authorities to formulate a system to stop such nefarious campaigns in the future.

Last week, the PTI chairman raised had questions against the judiciary for not taking “suo moto action” against the incumbent rulers. According to the former PM, the judiciary would be answerable to Allah for their failure to act when the “crooks” were giving themselves an “NRO” by amending the National Accountability Bureau law.

He had also asked why the “institutions” allowed the coalition government, led by the PML-N, to be imposed on the people of Pakistan.

Imran has also previously alleged that “interference (mudakhlat)” was under way to change the results of upcoming by-elections in Punjab.