Barricades in place, security beefed up ahead of PTI’s protest outside ECP 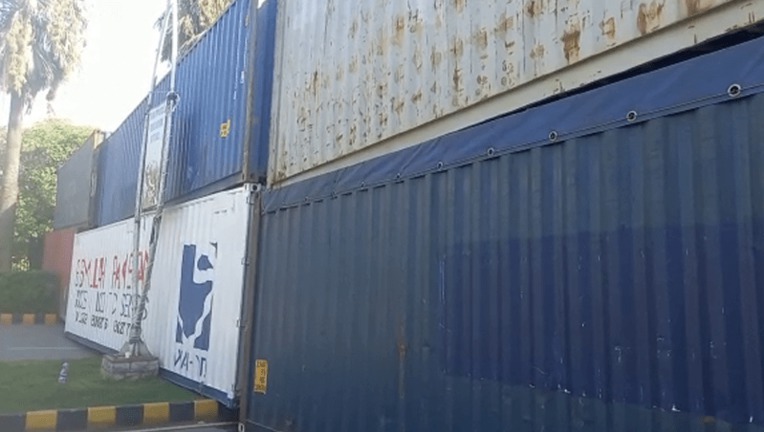 Security was beefed up and shipping containers were placed in the federal capital on Thursday ahead of the PTI’s planned protest outside the Election Commission of Pakistan’s office.

The PTI, which has demanded Chief Election Commissioner (CEC) Sikandar Sultan Raja’s resignation, is scheduled to stage a protest outside the electoral watchdog’s office today (August 4). The PTI’s protest was called in anticipation of the prohibited funding verdict.

The government, however, has declared it won’t allow protesters to enter the Red Zone.

On the other hand, in an interview last night, party chief Imran Khan said only a parliamentary delegation of the PTI would go to the ECP office and convey that the party had lost confidence in the electoral body.

But authorities were taking no chances, as containers were reportedly set up blocking entry into the high-security Red Zone area, and citizens were directed to use Margalla Road in order to enter.

In a statement, Islamabad SSP (Operations) said that no one would be allowed to enter Red Zone. He said that 2,000 officials from Islamabad police, Frontier Corps and Rangers had been deployed.

It comes after Islamabad authorities denied the PTI’s request to stage a protest against the ECP at the nearby Nadra Chowk and has suggested F-9 park and H-9 ground as alternate venues.

Interior Minister Rana Sanaullah claimed yesterday that the government had received information that the PTI was planning to create an “anarchic situation” outside the ECP, warning of stern action in case of any violence or attempt to cross the “red line”.

Sanaullah also said that the demonstrators were free to protest at the nearby F-9 park or Parade Ground, where he assured them they would be fully facilitated.

The letter, dated August 3, stated that Section 144 had been imposed on all kinds of public gatherings in the federal capital including in and around Red Zone on July 23.

“The instant application has been examined at length in the context of orders passed by the Honourable Supreme Court and the Honourable Islamabad High Court. Moreover, it is imperative to mention here that various government offices /buildings, including Election Commission and embassies, are situated in and around Red Zone.

“In view of the above, the application for holding [a] public gathering at Nadra Chowk, Islamabad is hereby ‘regretted’,” the DM said.

However, the Islamabad administration proposed F-9 parks and H-9 ground as alternative venues, highlighting the terms and conditions for the public gathering.

“You are, therefore, requested to kindly intimate one of the two venues mentioned […] where you are willing to hold [the] public gathering so that security arrangements can be made accordingly,” the DM said.