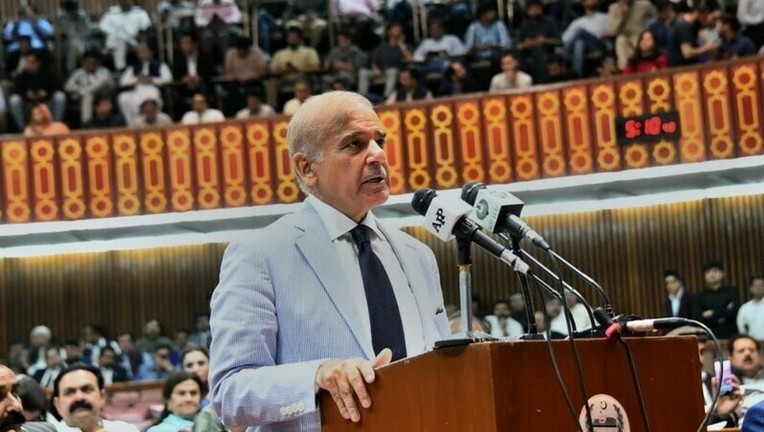 Prime Minister Shehbaz Sharif on Friday called out India for its continuous “use of unbridled force” in Indian Illegally Occupied Jammu Kashmir (IIOJK) as nation marked three years since New Delhi stripped the valley of its special autonomy.

In a series of tweets, the premier said: “Today marks the third sombre anniversary of India’s illegal and unilateral actions of August 5, 2019 aimed at changing the internationally recognised disputed status of occupied Jammu and Kashmir and altering the demographic structure of the occupied territory.”

He lauded brave Kashmiris for persevering in the face of fear, intimidation, torture and the worst forms of human rights violations. “Indian oppression has failed to dent their resolve,” PM Shehbaz remarked.

“The Jammu and Kashmir dispute has been a battle of hope against overwhelming odds, of courage against fear and of sacrifice against tyranny. Today, we pay rich tributes to all the martyrs of IIOJK for their ultimate sacrifice and to their families for their resolve and courage,” the prime minister added.

In a statement issued by the President House, President Dr Arif Alvi said that the resolution of the Kashmir dispute was the only way to ensure durable peace and stability in the region.

“India’s actions of August 5, 2019 contravene several United Nations Security Council (UNSC) resolutions which stipulated that the final disposition of the State of Jammu and Kashmir will be made in accordance with the will of the people through a free and impartial plebiscite conducted under the auspices of the United Nations,” he stated.

The president further promised that Pakistan would “continue to stand shoulder-to-shoulder with our Kashmiri brothers and sisters in their just struggle”.

PTI Chairman Imran Khan said that on August 5, 2019, the Modi government “violated the UNSC resolutions and international law by illegally revoking the special status of IIOJK”.

Further, India then “moved to commit a war crime under Fourth Geneva Convention by altering the demography of IIOJK,” he pointed out.

India thought the move would crush the spirit of Kashmiri resistance but instead it continued to grow, he said.

The ex-premier condemned the silence of the international community, calling it “selective morality”.

“We are asked to echo condemnations on issues of human rights the powerful in the international community take up. But when it comes to India and its massive human rights violations in IIOJK, there is complete silence by the same powers because of India’s market or its strategic military partnerships,” he said.

Meanwhile, federal ministers Khawaja Asif and Qamar Zaman Qaira led a rally in Islamabad from the Foreign Office to the Constitution Avenue to express solidarity with oppressed Kashmiris.

According to a report by Radio Pakistan, the participants held banners and chanted slogans against Indian atrocities in the occupied valley.

Addressing the rally, Asif said that Pakistan’s commitment to IIJOK was everlasting and promised that it would never falter.

In his remarks, Kaira said that the Kashmiri people had been braving Indian atrocities over the last seven decades and had sacrificed over 100 lives.

Every Pakistani is aware of their national responsibility and stands by their Kashmiri brothers and sisters, he added.

India’s 2019 revocation of Article 370, subsequent Pakistani efforts On August 5, 2019, India’s ruling Bharatiya Janata Party (BJP) had revoked occupied Kashmir’s special status by repealing Article 370 of the constitution. The move allowed people from the rest of the country to have the right to acquire property in occupied Kashmir and settle there permanently.

Kashmiris, international organisations and critics of India’s Hindu nationalist-led government saw the move as an attempt to dilute the demographics of Muslim-majority Kashmir with Hindu settlers.

Separately, earlier this year, the Indian government said a delimitation commission had finalised 90 assembly constituencies for the IOK, excluding Ladakh, with 43 seats for Jammu and 47 for Kashmir. Earlier, Jammu had 37 seats and the Kashmir valley had 46.

The delimitation commission claimed it had been difficult to accommodate competing claims from various sides, citing in a statement the region’s “peculiar geo-cultural landscape”.

Subsequently, the Pakistan Foreign Office had handed over a demarche to Indian Charge d’Affaires, conveying the Government of Pakistan’s categorical rejection of the report of the so-called ‘Delimitation Commission’, which was aimed at disenfranchising and disempowering the Muslim majority population of occupied Kashmir.

The FO had called on India to refrain from bringing about any illegal demographic changes in the occupied territory, stop forthwith its oppression in the IIOJK, and let the Kashmiri people determine their own future through a free and fair plebiscite under the UN auspices.