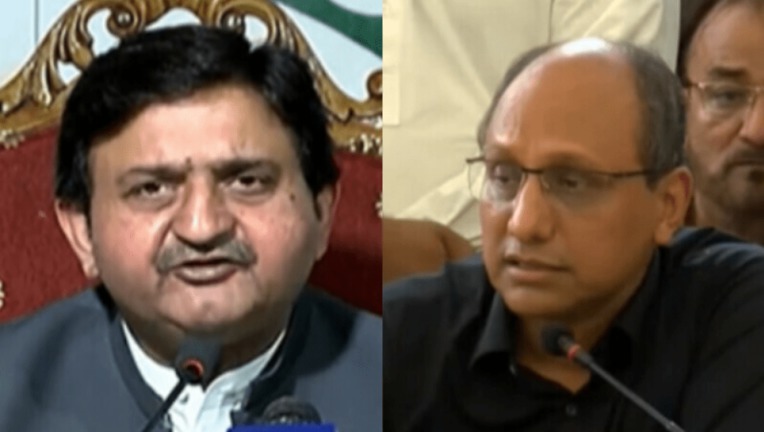 “We demand that you tell us the names of those neutrals,” PML-N’s Malik Ahmed Khan said in a press conference in Islamabad.

Khan and Ghani’s statements come in response to claims made by Imran in an interview to Express News earlier this week. The ex-premier had claimed that it was the neutrals — a euphemism he uses to describe the military establishment — who suggested Raja’s name as the CEC.

He had said that according to the 18th Amendment, heads of the National Accountability Bureau (NAB), ECP and caretaker governments were supposed to be decided amicably by all the political parties.

“At the time of CEC’s appointment, there was a deadlock [among the parties]. So, the neutrals approached us and said that the country needed to move forward.

“They suggested Sikandar Sultan’s name. I didn’t even know him [back then]. But people told us that he was PML-N’s man,” Imran had said, adding that when he told the neutral about this, they guaranteed that the CEC would stay neutral.

Malik said: “Show some spine and tell us who were the neutrals who gave you this guarantee.

“Did [Army chief] General Bajwa say this to you? And if yes, then please have some audacity […] have some courage […] then say it. If General Faiz Hameed said this, then please take his name and say it plainly,” he said.

“So tell us. Who gave you this guarantee that the CEC will stay neutral? You said it on television. Tell us.”

Malik further went on to ask Imran: “Where did the neutrals come in? If you, or any member of your party, has the courage, come forward and name them. Also, tell us who do you call ‘neutral’? Is it the army chief or the DG ISI or the institution?”

The PML-N leader alleged that it seemed as if the PTI chief uses the word “neutral” to demean the institution and reiterated that Imran should substantiate his comments in public.

Separately, talking to media persons in Karachi, PPP’s Ghani put forward a similar question. He said that Imran himself appointed the election commissioner and then blamed the “neutrals” for it.

“Who from the neutrals said it? Tell us the name,” he asked. “It will be more fun when he says the name — just ask him.

“Neutrals aren’t just a thing. There must be some people who he [Imran] said passed instructions or pressurised or suggested the [CEC’s] name […] tell us their names. Who said this to you?”

Ghani then reiterated that Imran would not reveal the names of the “neutrals”, adding that Imran called others “boot polisher” but himself admitted that the “neutrals” influenced his government’s decisions.

The leader further claimed that the Election Commission of Pakistan’s verdict in the PTI prohibited funding case had confirmed that Imran was “backed by people” whose interests were against the country’s.

They added that the statements Imran was making these days were just an attempt to “escape from the law”.

In its much-anticipated verdict this week, the electoral body had ruled that PTI had “wilfully” and “knowingly” received prohibited funding from a number of foreign donors.

In its order, the commission also said that it was “constrained to hold that Imran Khan failed to discharge his obligations as mandated under the Pakistani statutes”.