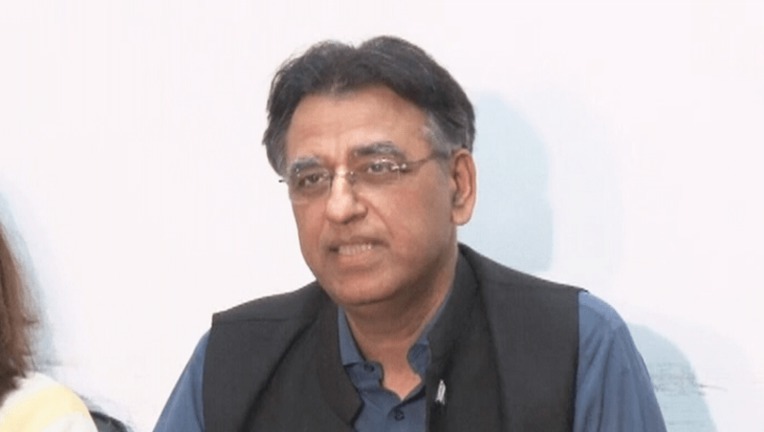 Senior PTI leader Asad Umar on Wednesday accused the PML-N-led coalition government of attempting to create discord between the PTI and the army — an effort he said was bound to fail.

Addressing a press conference in Lahore, Umar said cases were being filed against his party in a manner as if it was “a threat to Pakistan”.

He said Imran’s political rivals see him as a threat to the “entire old system”, adding that “foreign powers, who have a habit of dictating Pakistan, also see Imran as a threat”.

The PTI leader said it was a historic turnaround that the people had taken to the streets and rejected foreign interference as they saw Imran as their “hope”.

Umar said a “condemnable” tweet was posted from a Twitter account that merely had 50 followers, “and it was played up by accounts with huge following only to add fuel to the fire”.

He said the top brass of the ruling coalition, including Nawaz Sharif, Maryam Nawaz, Asif Ali Zardari and Maulana Fazlur Rehman had been criticising the army until the recent past. “Was any action taken against them?” he questioned.

He said Imran had even emphasised the need to have a strong army after losing the government. “Our chairman had categorically said Pakistan needs its army more than Imran Khan.”

The PTI leader insisted that the nation had realised its power. “If decisions for the future of Pakistan are taken, it will only be made by people and not anyone else,” he added.

The former planning minister dismissed the possibility of Imran being sidelined from mainstream politics.

“There is no 62-1(f) [Article of the Constitution] sword hanging on him and also there is no room for a technical knock. They [the government] will have to write a new constitution to knock Imran out,” Umar said in response to a question.

Article 62(1)(f), which sets the precondition for a member of parliament to be “sadiq and ameen” (honest and righteous), had provided the grounds for the disqualification of former prime miniser Nawaz Sharif from holding public office in the July 28, 2017, judgement on the Panama Papers case handed down by the apex court.

Umar said the incarcerated party leader Shahbaz Gill has all rights to explain and justify whatever he had said.

“He has the right to clear his position under the law.”

The PTI leader asked whether any action was taken against Nawaz Sharif who had been rebuking the army’s top brass. “Why was not he arrested or his party banned?”

The PTI also berated the Election Commission of Pakistan for treating the PTI with “sheer discrimination” through its verdict in the prohibited funding case.

He recalled that the ECP had “dropped” the use of the phrase “foreign funding”, saying how did it start using it again when it was not even mentioned in the law.

He claimed that the ECP verdict was “baseless, misinterpreted, discriminated and the commission overstepped its authority while jotting down remarks in it”.

Umar said several individuals who funded the party had now been sending their recorded video statements and affidavit only to confirm their identity and the source of money, but the ECP was turning a blind eye to them “only because it issued a verdict against us with a mala fide intent”.

The ex-minister said the prohibited sources of funding were clearly mentioned in the Political Order of 2002. The case of business tycoon Arif Naqvi dates back to 2008-13 while the Election Act was amended in 2017, and the ECP misinterpreted the law while levelling false accusations in this connection, he alleged.

“Bill Gates Foundation was investing in Naqvi’s company in 2013 and the British royal family was also involved in business with him. Did they know in advance that Naqvi will turn out to be a criminal in 2018?” he asked.

He said the ECP’s scrutiny committee also failed to find sources of Rs350-400 million funds given to the PML-N, adding that the watchdog took no action and served as a tool for the PDM to target the PTI.