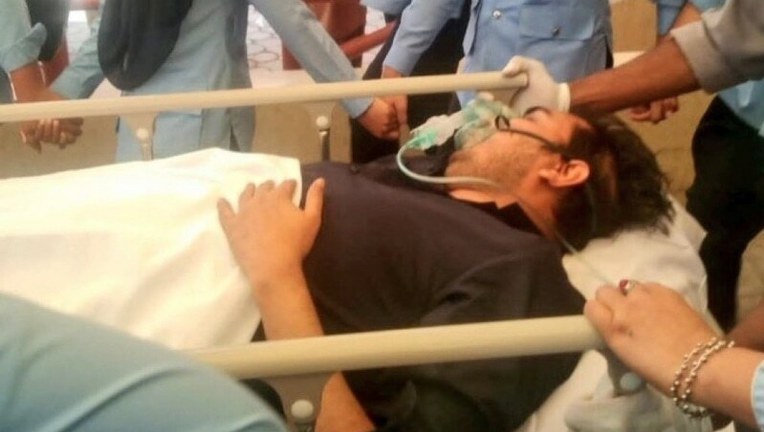 The Islamabad High Court (IHC) on Thursday summoned authorities to appear before it at 3pm while hearing the PTI's plea against Shahbaz Gill's physical remand.

A day earlier, a judicial magistrate had granted Islamabad police two-day physical remand of Gill and ordered officials to conduct a medical examination.

However, the PTI leader, who was booked in a sedition case, was being held at Rawalpindi’s Adiala Jail, which falls within the jurisdiction of the Punjab government where the party is in power along with PML-Q.

In a bid to thwart the handover, arrangements were made to move Gill to Raw­a­l­pindi District Head­quarters (DHQ) Hospital after he complained of breathing difficulties.

A standoff ensued but the Islamabad police finally managed to get Gill's custody and moved him to the Pakistan Institute of Medical Sciences (Pims) on Wednesday night.

The PTI has claimed that Gill has been tortured during his incarceration. The party has also alleged that the PTI leader is being coerced into making a statement against party chief Imran Khan.

During the hearing, Shaheen contended that the additional sessions judge did not follow the "guidelines" provided within the law.

I have come to know that Gill has been admitted to Pims. The Adiala Jail superintendent has been summoned so that we can verify the facts, Justice Farooq said.

At one point, Shaheen contended that they were not being allowed to meet Gill. The judge responded that this matter would also be discussed when the officials appear.

The hearing was subsequently adjourned till 3pm.

In the order, a copy of which is available with Dawn.com, the court issued notices to the respondents excluding the sessions judge.

The court also summoned the Islamabad inspector general of police, SSP investigation, SHO Kohsar, and the Adiala Jail superintendent and medical officer along with the relevant records at 3pm.

Separately, former premier Imran shared a video of Gill being transported to Pims, in which he appeared to be convulsing.

"Descending into a banana republic. The civilised world will be shocked at our levels of barbarism. The worst part is an easy target has been chosen to make an example of through torture and without a fair trial," the PTI chief said.

Meanwhile, the likes of Nawaz Sharif, Maryam, Maulana Fazlur Rahman, Asif Ali Zardari, all of whom have in the worst possible way and repeatedly attacked state institutions through malicious and targeted statements against them, get away without even a hint of a reprimand, he deplored.

Speaking to the media outside Pims on Wednesday night, PTI Senator Ejaz Chaudhry said that Gill was brought to the facility at approximately 10pm.

"He was on a stretcher. He was breathing with great difficulty, it seemed as though he was not able to breathe," he said, adding that "hundreds" of policemen were surrounding the politician.

He claimed that doctors at the facility recommended that Gill be hospitalised as his condition was fragile. He also lamented that police officials were present inside the room Gill was in, which was adding to his physical and mental stress.

On August 9, the Pakistan Electronic Media Regulatory Authority (Pemra) had issued a show-cause notice to ARY News for airing comments from Gill, that it said were “highly hateful and seditious” remarks tantamount to “incite armed forces towards revolt”.

The notice went on to say that Gill was invited via a telephonic call for his comments and during his talk with the channel, Gill had alleged that the government was trying to provoke the lower and middle tier of the army against the PTI, saying the families of such “rank and file” support Imran Khan and his party “which is fuelling rage within the government”.

He had also alleged that the “strategic media cell” of the ruling PML-N was spreading false information and fake news to create divisions between PTI chief Imran Khan and the armed forces.

Gill had said the government leaders, including Javed Latif, Defence Minister Khawaja Asif and former National Assembly speaker Ayaz Sadiq, had lambasted the army in the past “and they were at the government positions now”.

“The statement made by the guest on ARY News is a violation of Article 19 of the Constitution as well as Pemra laws. Airing of such content on your news channel shows either weak editorial control on the content or the licensee is intentionally indulged in providing its platform to such individuals who intend to spread malice and hatred against state institutions for their vested interests,” the watchdog stated.