Rana Sanaullah says Imran, not army, behind narcotics case against him 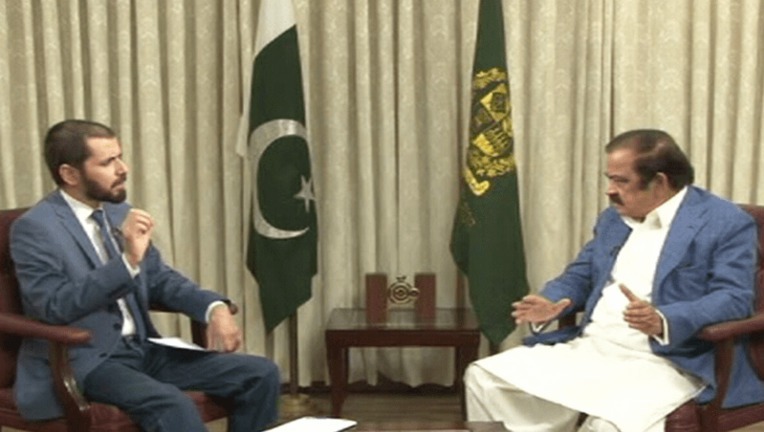 Interior Minister Rana Sanaullah has alleged that former prime minister Imran Khan was behind the narcotics case against him and rubbished the notion that the army was behind it.

“When I was in the opposition, in one of the briefings [in parliament] I complained to [Chief of Army Staff] General [Qamar Javed] Bajwa that a false case has been registered against me but he categorically rejected that the army was intervening in this case,” he said while talking in an interview on the Dawn News show “Live with Adil Shahzeb” on Wednesday night.

Sanaullah continued that when he was out on bail, a person associated with the army chief met him and asked him to submit an application about his case and the army would conduct an inquiry.

“I submitted an application not only to the army chief but also to the chief justice and I think based on that inquiry Gen Bajwa said that it was a wrong [impression that the army was intervening and influencing the case],” he maintained.

Sanaullah was arrested by the Anti-Narcotics Force’s (ANF) Lahore team while he was travelling from Faisalabad to Lahore near the Ravi Toll Plaza on the motorway on July 1, 2019.

The ANF claimed to have seized 15 kilogrammes of heroin from his vehicle. A special team of the force had also arrested five others, including the driver and security guards of the PML-N leader.

According to the first information report registered by the ANF, it had received information that Sanaullah was allegedly involved in drugs smuggling and was taking heroin to Lahore.

The minister said in the interview that of all things, one point was “proven” that whether it was the Federal Investigation Agency, National Accountability Bureau, ANF or other institutions, “Imran was behind all such cases”.

To a question whether he was convinced that the army was behind all the cases of political victimisation of the political leadership, the interior minister said he was convinced it was “nobody but Imran Khan, he is responsible for all of this”.

The interior minister added that apart from Khan, the former state minister for narcotics Shehryar Khan Afridi was used and even the then ANF chief Major General Arif Malik was also persuaded to become complicit in the case.

Talking about the alleged torture of PTI leader Shahbaz Gill, Sanaullah said it was all a “drama to take the attention away from the social media campaign by the PTI after the Lasbela incident”.

“The statement of Gill on ARY News was all a fixed match chaired by Imran and every word was crafted as nobody can talk for 12 minutes without having written text. Besides, Fawad Chaudhry was the next one to go on air on TV,” he said, adding that “credible evidence” had been obtained against Gill.

Sanaullah said the satellite phone recovered from Gill’s room in the Parliament Lodges had some numbers which were allegedly from India and the United States and there was constant coordination with them.

“We have all the evidence about that.”

Talking about the purported return of the banned Tehreek-i-Taliban Pakistan in Swat, he said the issue was being blown out of proportion. “TTP has neither the capacity nor the position to fight an organised army,” he said, adding that all the news of their return was “propaganda”.