‘Misleading and incorrect’: Nawaz dissociates himself from ‘negative comments’ about PM Shehbaz 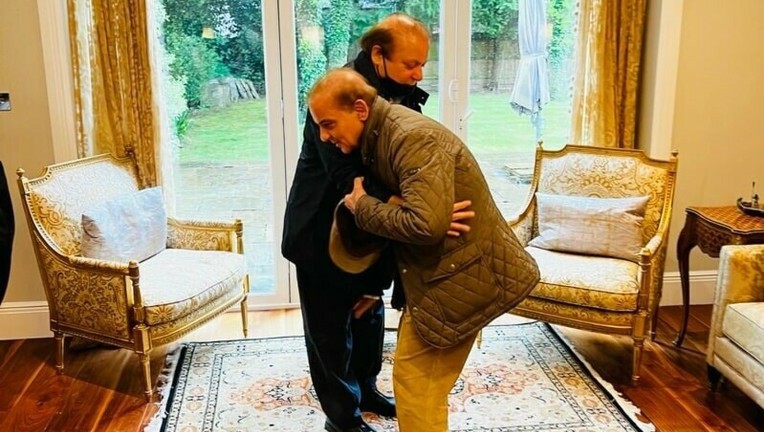 PML-N supremo Nawaz Sharif has dissociated himself from “negative comments” about his younger brother and incumbent Prime Minister Shehbaz Sharif, expressing hope that the premier would steer the country out of the present-day’s challenging circumstances.

“The negative comments attributed to me about PM Shahbaz Sharif are misleading and incorrect,” Nawaz said in a late-night tweet on Thursday, without elaborating on what comments he was referring to.

The former prime minister added that he remained hopeful that “sincere and tireless efforts by SS (Shehbaz Sharif) under the most challenging circumstances will bear fruit and he will steer the country out of the mess created by Imran Khan”.

Nawaz’s clarification comes amid indications of an internal rift within the party.

Signs of the purported friction were visible as early as May, less than two months into a PML-N coalition coming to power following the ouster of former prime minister Imran Khan through a no-confidence vote.

PML-N Vice President Maryam Nawaz, who was once seen as the party supremo’s heir apparent, had openly endorsed at a May 19 rally in Sargodha Imran’s demand for fresh elections while the new coalition setup was struggling in the face of an economic crisis.

The new regime, since the start of its term, was presented with grave economic challenges and had been under pressure to make a hard choice between going for early elections or taking tough decisions to save the country from default at the cost of losing political capital.

Editorial: To be or not to be

At the Sargodha rally, Maryam had been of the view that it was wiser to opt for fresh elections than burden the masses with price hikes.

“Nawaz Sharif is listening to my speech in London. He will say goodbye to the government but not pass on the economic burden to the people of Pakistan,” she had said.

Maryam’s remarks had come a day after the ruling coalition decided to complete its term, which ends in August 2023.

More recently, there were reports of Nawaz being upset over the PML-N’s loss in the crucial by-polls on 20 seats of the Punjab Assembly — a defeat that paved the way for his party to lose the country’s most populous province to the PTI.

According to a Dawn report, Shehbaz’s son and Punjab’s embattled chief minister at the time Hamza Shehbaz left for London earlier this month to reportedly give an explanation to Nawaz for the PML-N’s loss in the by-polls and him losing the CM’s office to Parvez Elahi, the joint candidate of the PTI-PML-Q alliance.

“Hamza will have to satisfy his uncle for his poor performance being the CM and his father’s flawed strategy in the face of Khan’s aggressive campaign during the by-polls,” a PML-N insider told Dawn.

Conjecture about rifts in the PML-N found further ground after the Shehbaz government announced yet another increase in the price of petrol on August 15.

Following the raise, Maryam tweeted that Nawaz had strongly opposed the decision and even said he couldn’t burden the people further and that he was not in favour of the decision.

A day later, a Dawn editorial said: “It is unfortunate, then, that his (Finance Minister Miftah Ismail) main opposition has come not from the PTI but from a camp within his own party that remains beholden to the ideas of former finance minister Ishaq Dar.

“It seems that Dar has the ear of party supremo Nawaz Sharif and that he has been filling it with some troubling opinions about how the economy really ought to be managed. The Nawaz camp’s hostility towards Ismail also seems to flow from Dar’s well-known contempt for his younger counterpart.”

And it was as recent as yesterday that another PML-N leader, Abid Sher Ali, criticised Ismail for his “anti-people” policies, urging him to think of the masses who were “agonised” because of inflated electricity bills and poverty.

Addressing a press conference alongside party leader Talal Chaudhry in Faisalabad, he said, “I have appealed to Mian Nawaz Sharif to intervene and get it (increase in electricity prices) reversed.”

“Mr prime minister, you have always delivered in Punjab and your sympathies should reflect in your measures, otherwise we will not be able to visit constituencies,” he added, warning against pushing the country towards a civil war.