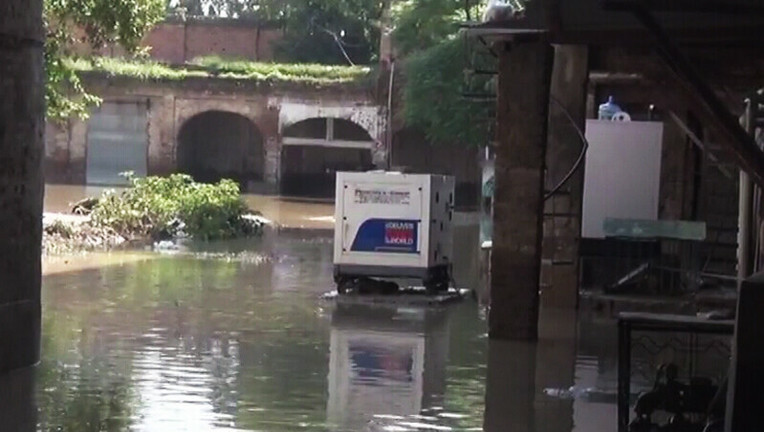 The overall death toll from floods across the country reached 1,033 on Monday as the threat of more flooding lingered in Khyber Pakhtunkhwa.

Radio Pakistan reported that according to a situation report of the National Disaster Management Authority (NDMA), 1,527 individuals were injured in various rain and flood-related incidents and over 719,000 livestock animals were lost.

Meanwhile, the water level in Kabul River still ranged from medium to very high flow. Data available from the flood cell showed that a decrease of 41,000 cusecs was recorded in the river’s water level and 296,731 cusecs were passing through the river at Nowshera — which was still “very high” flow.

The irrigation department also said that a “high” flow was reported in Kabul River at Warsak with 103,614 cusecs and “medium” flow at Adezai Bridge with 54,495 cusecs flowing.

According to a statement from Nowshera’s deputy commissioner office, the water level in the Kabul River was continuously decreasing and was likely to go down further in the next five to six hours.

Moreover, high water level was also observed in the Indus River at Chashma, with inflow and outflow levels recorded at 525,362 cusecs and 519,362, respectively.

However, the flood cell data showed that the rest of the rivers in KP were flowing at low, normal, and medium levels.

“In this hour of difficulty, we stand side by side with our people. We believe in public service by being among the people,” CM Khan said.

He said a number of tourists were still stranded in Kumrat.

The meeting would be held at 6pm at the Prime Minister’s House, she added.

She said all chief ministers were also invited to the meeting, which would also be attended by the armed forces’ leadership.

“Important decisions” are expected to be taken during the meeting, Aurangzeb added.

Meanwhile, the prime minister was briefed about the damage caused by floods and the relief operations underway in Nowshera.

PM Shehbaz is set to interact with flood affectees during the tour and later visit Charsadda and Mohmand Dam as well, where he would be briefed about the progress of the project’s execution.

The PTI also shared details of the two bank accounts in which donations could be given.

In a video message regarding the telethon, Imran called on the people to participate and contribute as much as they could.

Radio Pakistan reported that according to the military’s media wing, over 70 relief camps were established in Punjab to facilitate flood victims.

The Inter-Services Public Relations (ISPR) said that 10 relief camps were established in Lahore division, 12 in Multan, 17 in Gujranwala, and 19 in Bahawalpur division.

The ISPR added that further camps would be established and the flood affectees were being provided cooked food, medicines and other items of daily use.

It also said that a helpline number (1135) was set up by the army to guide the public regarding donations for flood relief.

The chief minister inspected the water level at Manchar Lake and its dams. He was briefed by officials about the water flow at various barrages.

CM Shah expressed hope that the lake’s water level would begin dropping in the next eight days and said he had to take decisions to prevent cities from drowning.

Talking to the media at the lake, the chief minister said the situation was “bad throughout Sindh” and the government’s first priority was to save lives.

“Currently, the pressure is high on both sides of the river,” he said.

The chief minister said he had talked with the naval chief and two navy helicopters were reaching Dadu. Regarding relief operations, he said the government had distributed 150,000 tents but the need was “much greater”.

He also said that action was being taken against hoarders and those who were involved in stealing funds from the Benazir Income Support Programme would be jailed.