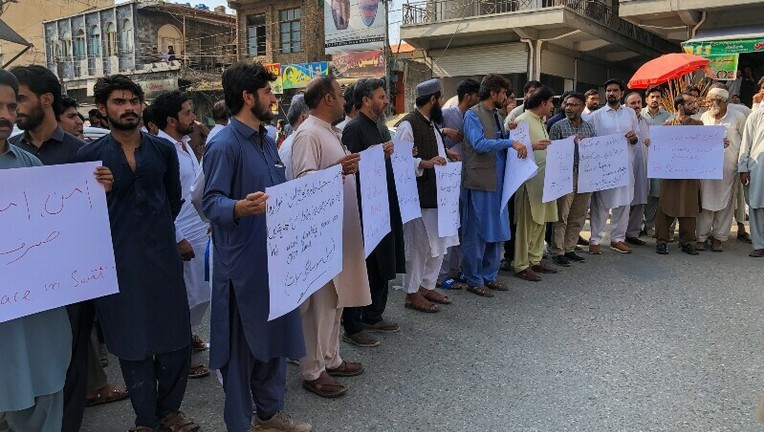 Citizens in Khyber Pakhtunkhwa’s Swat valley protested against the recent wave of terrorism as the death toll of Tuesday’s attack rose to 10.

A day earlier, six people, including a former Aman Committee head and two policemen, were killed when a remote-controlled bomb struck their vehicle in the Ghlo Kandaw area of Kabal Tehsil in Swat valley.

Former peace committee head Idrees Khan, two police guards Ramail and Tauheed, and a child were on their way from Kotakay to Bandai village when the bomb, planted on a dirt road, went off, leaving the four people dead on the spot. Two pedestrians were also killed in the blast.

The attack was claimed by the outlawed Tehreek-i-Taliban Pakistan (TTP) which stated that Idrees had been on their hit-list for nearly 13 years.

On Tuesday, the death toll rose as four more casualties were reported.

The officer said that no arrests have been made so far, reiterating that investigations were continuing.

Meanwhile, the funerals of some of the victims were held on Tuesday. The funerals of the two policemen were held at Police Lines and were attended by politicians, government officials and locals.

Idrees’ funeral was held in his native village of Bara Banda where he was laid to rest. A large number of mourners attended the funeral amid tight security arrangements.

The deceased Idrees had played a prominent role in mobilising resistance against the Taliban after they overran large swathes of Swat in 2007. He was named chairman of the village Aman Committee in recognition of his bravery, and had survived multiple attempts on his life in the past.

Swat valley came under the sway of militants in 2007 when the Taliban challenged the writ of the state under Mullah Fazlullah.

A decisive military operation succeeded in eliminating militancy from the region in 2009. But there have been reports of late that militants have resurfaced after 12 years and they are threatening villagers with dire consequences if they denounce them to the authorities.

Separately, provincial minister Shaukat Yousafzai denied that the KP government was negotiating with the Taliban.

“The provincial government does not have representation in the talks under way with the Taliban,” he said in a statement, adding that the Centre was negotiating with the Afghan government.

Yousafzai went on to say that Pakistan was suffering the effects of the change of government in Afghanistan. “The Afghan government is forcing some people to return to Pakistan, the effects of which are being witnessed,” he said.

A large number of civil society members took to the streets on Wednesday against the fresh wave of terrorism in the valley and condemned yesterday’s attack.

Protesters held banners and placards bearing messages of peace as they gathered at Nishat Chowk in Mingora. They also chanted slogans demanding peace in Swat and Malakand Division.

They also questioned how militants were able to enter Swat given the presence of intelligence and law enforcement officials.

“We do not know how militants can enter Swat as it does not share borders with Afghanistan. In situations like this, the presence of terrorists is not only condemnable but also questionable,” a demonstrator said.

Further, the office bearers of the Swat District Bar Association condemned the recent wave of terrorism in an emergency meeting chaired by Advocate Muhammad Mushtaq Khan.

“We strongly condemn the recent incidents of terrorism as well as the weak law and order situation,” the lawyers said, adding that several important personalities had received extortion letters and threatening phone calls telling them to pay a huge amount.