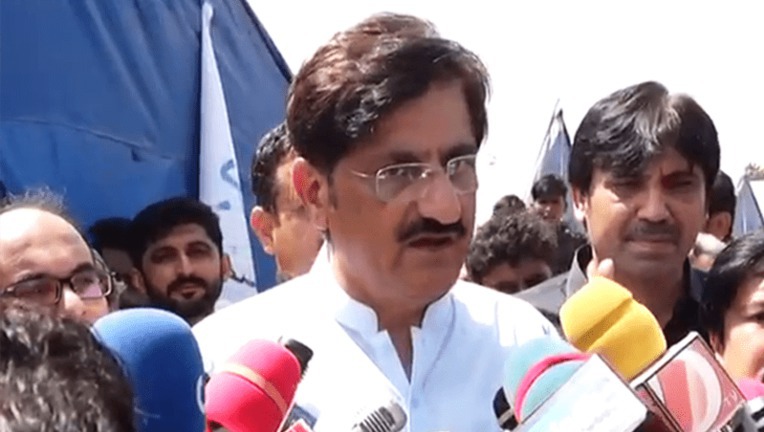 Sindh Chief Minister Murad Ali Shah on Friday differed with suggestions from various quarters over the significance of dams in minimising the devastation caused by floodwater, saying the deluge in the province was too big to be tackled by dams alone.

Speaking to journalists after chairing a meeting in Hyderabad, the provincial chief executive asked those suggesting the construction of dams to explain how the 120 million-acre-feet of water in Sindh could be taken to Tarbela and Diamer-Bhasha Dams.

He also wondered if there was a location in the province where such a large quantum of water could be stored, adding that he was open to “all suggestions”.

“Some experts have also given their input, and one asked why I was drowning the people and said I should divert the water,” he said. “Please tell me how I can keep moving or diverting water like a vehicle.”

However, he added that he was open to suggestions from anyone that could help in dealing with the flood situation.

“Not only the army chief but many others have discussed the construction of dams [to store water],” the Sindh CM said.

Shah, who is a civil engineer by profession, then said: “I have a question for those recommending constructing a dam: Sindh has received 120 MAF of water. Can anyone tell me how this water can be taken to Tarbela or Diamer-Bhasha?”

He went on to say that these were challenging times for the people of the province. “Right now, we need 1.5m tents for shelterless people in Sindh,” he said, adding that around 15m people had been displaced in the province.

He pointed out that the provincial administration was ready to procure more tents and ration bags, which he said, had been ordered through the Utility Store Corporation.

“We have given all government-related exemptions to procure ration bags with our quality control specifications,” he said.

He assured the journalists that the government was working on providing relief to the affected population. “If people are complaining to me about the lack of assistance, that means that I am going to them and have not left them in the lurch,” he argued.

Shah said he realised that people were expressing their grievances. “It is their right to put their demands to the government. They are in distress,” he acknowledged.

Meanwhile, Federal Minister for Communications Asad Mehmood said that his ministry was in touch with the provincial government to restore communication links of roads, adding that five to six districts were still under water ever since the floods entered the province.

The minister appealed to the world to help Pakistan’s flood-hit population, the minister said.

Mahmood said that the government was confronted with both rescue and rehabilitation challenges. “We need to see how to rehabilitate infrastructure for which a mechanism has been prepared. We will try to approach other countries to help us in this regard,” he added.

He maintained that the situation in Sindh was “disturbing” compared to other parts of the country. “We are not getting access and we are unable to reach points to restore connectivity at places”, he highlighted.

He was of the view that people would need to show patience even in the face of problems they were braving.

CM Sindh said that he had discussed with the federal communication minister that National Highway being important artery, should remain open “at all costs”.

Of the Indus Highway, he said, it was submerged under 8-10ft of water in some locations.

He said he had discussed the issue of Sukkur-Hyderabad motorway and the two sides had decided to take it forward. He said other big projects like Jamshoro-Sehwan strip of Indus highway, Umerkot-Mirpurkhas and Keti Bunder-Gharo projects came under discussion.

CM Shah said that the M6 was part of the Public Sector Development Programme (PSDP) and said it had been ignored in the CPEC although it was an important road project. He underscored the need to start constructing this project as soon as possible.

He said that schemes of Sindh province under PSDP-like bridge over Indus river and Thatta-Keti Bunder 190km road should be executed as early as possible.

He regretted that barring Sukkur-Hyderabad motorway, all road projects were completed and in absence of this project, the people of Sindh were facing transportation issues.

He said it was for that reason that he kept writing to the then prime minister. He said it was a Rs300bn project but was being built on a BOT (build, operate and transfer) basis.

Shah said the Sindh government had 12 years of experience of public-private partnership (PPP) and the provincial government was building a Rs30bn Malir Express under PPP.

He said the 306km long Sukkur-Hyderabad was being built under PPP mode.

The federal minister assured the chief minister that work on projects under PSDP would be expedited. He said the Sukkur-Hyderabad motorway would be built.

He said the motorway involves cost of Rs1.37tr and it would be built on a BOT basis and completed under the public-private partnership mode.

NHA chairman informed the meeting participants that bidding on the Sukkur-Hyderabad motorway project had been done and now only a decision was to be taken, following which it would be completed in 2.5 years.