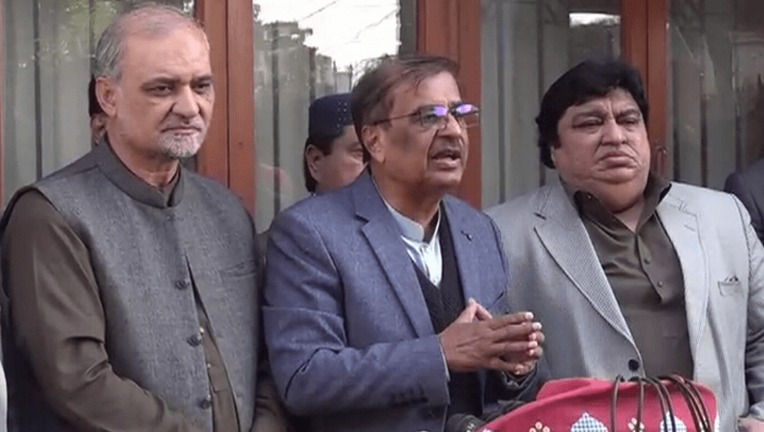 Jamaat-e-Islami’s (JI) Hafiz Naeemur Rehman on Sunday called for developing consensus among political parties for the sake of Karachi’s development in the wake of local body elections in Sindh.

The second phase of the local government elections was held in 16 districts of Sindh on Jan 15. However, major contesting parties — including the ruling PPP — had raised concerns over an unusual delay in the results in Karachi and blamed the Election Commission of Pakistan (ECP) for mismanagement.

The electoral body took more than 36 hours to announce the results of 236 union committees of Karachi as the opposition PTI and JI accused the provincial administration of “rigging and managing things” in its favour. However, contesting parties remain unsure about their mandate as the electoral watchdog has yet to finalise the results.

Speaking to the media in Karachi alongside PML-N Sindh President Shah Mohammad Shah, he said: “Before the election commission announces their decision, we want Shah to play a role in developing a consensus between all the parties of Karachi so that they come onboard and their mandate is accepted.”

Rehman said that he came to meet Shah because of his political experience and the latter’s familiarity with the dynamics in Sindh.

The JI leader stated that Karachi could not afford “further division”. “Despite our differences, all stakeholders should form a consensus for the sake of the city’s development.”

Rehman pointed out that everyone would reap the benefits if all political parties reached a consensus instead of indulging in the blame game. “This way every party will move forward and the competition will be in the field of work.”

Rehman reiterated that the JI was leading the recently held LG polls in Karachi. “If another party claims to be leading then the election commission can decide. We don’t mind recounting but it should be done in front of ECP officials and not returning officers.”

For his part, PML-N’s Shah congrtulated the party on its recent performance in the LG polls.

Shah further said that the JI had entrusted him with the role of mediator so that all parties could reach a consensus and move forward. He expressed the hope that this could be achieved and that Rehman “won’t be disappointed”.

He expressed his wish to see the PPP, the PML-N, and the JI work together but did not promise anything with regards to the PTI saying they “couldn’t be trusted”.

Responding to a question about the PPP offering the Karachi deputy mayor position to JI, Rehman said, “We haven’t spoken about this. They say they want to walk with JI, we also don’t want to fight them.

“It is our personal opinion that the [Karachi] mayor should be from JI because we secured the highest number of seats and votes,” he said. “The JI mayor will be everyone’s mayor.”