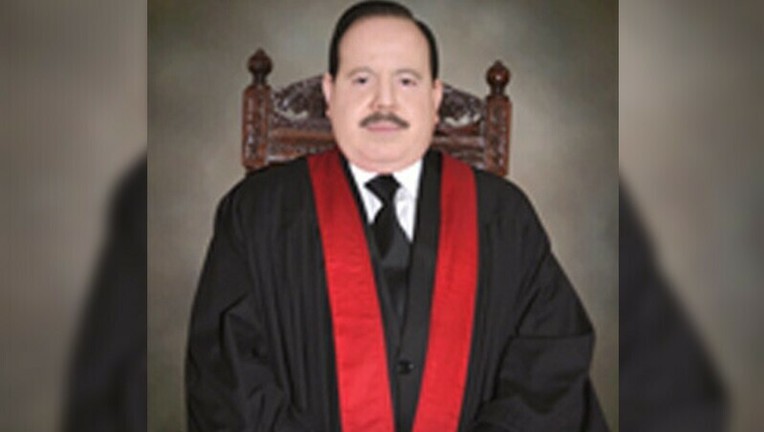 The Supreme Court’s Justice Sardar Tariq Masood on Tuesday recused himself from an in-chamber hearing on appeals against the Registrar Office’s objections on petitions seeking an investigation into a cipher — presented by PTI Chairman Imran Khan as evidence of a “foreign conspiracy” to oust him.

The pleas sought the constitution of a “high-powered commission” to probe the alleged “foreign conspiracy” that Imran claims was hatched to topple his government.

The petitions named the Federation of Pakistan through the law and justice secretary, the prime minister, and the cabinet secretary as respondents in the case.

However, the applications were earlier returned over objections by the Registrar’s Office. Subsequently, the petitioner filed fresh pleas in the court against these objections.

It is a common practice of the court office to sometimes return petitions by raising objections like questioning why the petitioner has approached the apex court directly without exhausting other available forums first. Such rejections are usually challenged by the petitioners and are taken up by a judge in his chamber as nominated by the chief justice.

During the hearing today, Justice Masood recused himself from hearing the petitions and sent them back to the top judge.

“The CJP can assign these chamber appeals to another judge for investigation,” he added.

The controversy surrounding the no-confidence motion against the former premier Imran Khan took a dramatic turn when the embattled PM brandished a letter at a rally on March 27 — days before his ouster — claiming it contained evidence of a “foreign conspiracy” hatched to topple his government.

Imran had kept mum about the contents of the letter when he first unveiled it but he spilled the beans days later by naming the United States when the exit of his government appeared imminent.

Imran’s allegation that the US spearheaded his exit from power was based on a cipher received from Pakistan’s Ambassador to the US, Asad Majeed, in which the envoy had reported about a meeting with Assistant Secretary of State for South and Central Asia Affairs Donald Lu.

Majeed had reportedly said that Donald Lu warned that Imran Khan’s continuation in office, who was set to face a vote of no confidence, would have repercussions on bilateral relations.

The US was said to be annoyed with Imran over his “independent foreign policy” and visit to Moscow.

The Pentagon and the State Department have repeatedly rejected the accusations, saying there was no veracity to it.

The National Security Committee (NSC), which includes all services chiefs as well as the head of Pakistan’s top intelligence agency, took up the matter on March 31 with then premier Imran Khan in the chair. The forum decided to issue a “strong demarche” to a country that it did not name over what it termed as “blatant interference in the internal affairs of Pakistan”.

It had also termed the interference “unacceptable under any circumstances” and said the language used in the communique was undiplomatic.

While the forum had stopped short of calling the interference a conspiracy at the time, another meeting of the NSC was held on April 22 with newly elected premier Shehbaz Sharif in the chair, and which included the same military chiefs who attended the March 31 session.

During its second meeting, the NSC statement said it “reaffirmed the decisions of the last NSC meeting” and explicitly went on to add that it found no evidence of a foreign conspiracy.