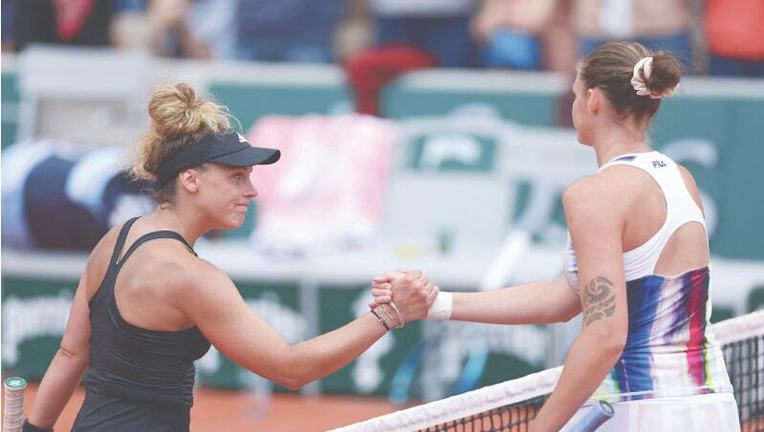 PARIS: Unstoppable world number one Iga Swiatek racked up her 30th successive victory at the French Open on Thursday as Karolina Pliskova became the sixth top 10 women’s seed to exit Roland Garros when she was knocked out by world number 227 Leolia Jeanjean.

Swiatek swept past Alison Riske of the United States 6-0, 6-2 to reach the third round.

The 2020 champion in Paris is on the best streak since Serena Williams’s 34-match winning run in 2013 and goes on to face Danka Kovinic of Montenegro for a place in the last 16.

Eighth-seeded Pliskova, last year’s Wimbledon runner-up and a semi-finalist in Paris in 2017, lost 6-2, 6-2 to 26-year-old Jeanjean who cut her teeth as a leading college player in the United States.

Jeanjean is the lowest-ranked woman to beat a top 10 player at Roland Garros in 34 years.

She will next face Romania’s Irina-Camelia Begu who was fortunate not to be defaulted in her 6-7 (3-7), 6-3, 6-4 win over 30th seed Ekaterina Alexandrova.

Begu, in frustration, bounced a racquet into the crowd which then hit a child who burst into tears. The supervisor was called but the 31-year-old escaped with a warning.

Spain’s Badosa, a quarter-finalist in 2021, recovered from a break down in the decider to set up a meeting with 29th seed Veronika Kudermetova.

Also going through was US 11th seed Jessica Pegula who needed eight match points to defeat Anhelina Kalinina of Ukraine 6-1, 5-7, 6-4.

Daniil Medvedev, the men’s second seed, had few problems in making the third round with a 6-3, 6-4, 6-3 win over Laslo Djere of Serbia.

Medvedev, who made the quarter-finals in 2021, goes on to face another Serb in Miomir Kecmanovic, the 28th seed.

The 19-year-old fired 28 winners but managed to avoid a worrying injury when his foot became lodged in a tarpaulin cover on Court 12.

The 19-year-old Alcaraz is attempting to become just the eighth teenager to capture a major men’s title, and backed as the man to break the stranglehold of Novak Djokovic and Nadal.

He goes on to face US 27th seed Sebastian Korda, the last man to defeat him at Monte Carlo in April in what was his only loss in 19 matches on clay this season.