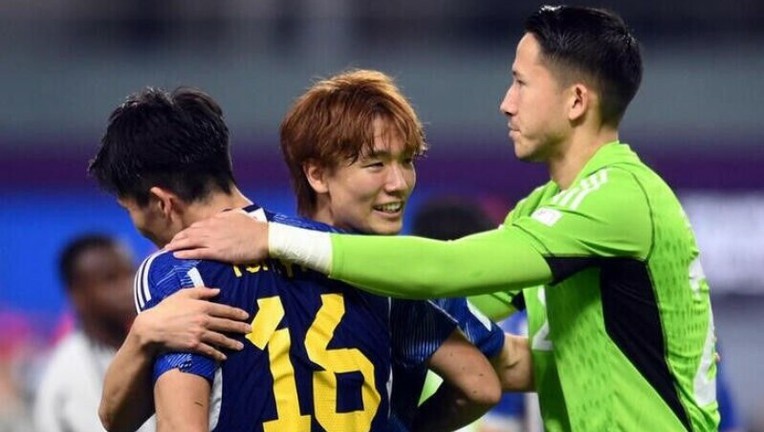 Just over 24 hours after Saudi Arabia set the FIFA World Cup alight with a stunning upset of Argentina, Japan did the same, holding off Germany’s furious attempts to salvage a point from the Group ‘E’ opener for both teams on Wednesday.

Upon receiving the ball wide out on the right from a free-kick in his own box, Takuma Asano took Nico Schlotterbeck out of the equation with a first touch for the ages. With the goal in his sights, Asano kept running but the angle for a shot kept getting tighter. Asano needed a ripper of a shot to beat Manuel Neuer.

Asano, on as a substitute just before the hour mark, did exactly that. The connection was pure, the ball crashed into the roof of the net and brought down the roof at the Khalifa Stadium.

Japan were seven minutes away from sealing a stunning victory against Germany and the hordes of their fans behind that goal, beating their drums, were now willing them on to complete a famous victory.

This, just like on Tuesday, saw the Asian side come from a goal behind in the second half to win. Japan had levelled matters just eight minutes before Asano’s winner. It was another substitute who did that. Japan had been knocking and the chance came when Neuer parried away a cross from Takumi Minamino and Ritsu Doan, who had been on the pitch for less than four minutes, was the quickest to react to plant a shot into the back of the net.

Following Japan’s equaliser, Germany coach Hansi Flick threw on striker Niclas Fuellkrug and attacker Mario Goetze, the man who scored the stunning extra-time winner for Die Mannschaft in the 2014 final in Brazil, to provide a moment of inspiration and stem the Japanese flow.

But when Asano scored, the Germans had been well and truly floored. They heaped pressure on the Japanese goal but the defence and goalkeeper Shuichi Gonda held on.

“I believe it’s a historical moment, a historical victory to say the least,” said Japan coach Hajime Moriyasu, when asked about the influence of Germany on Japanese football. “We have seven players who feature in the Bundesliga and that has contributed to this.”

Time was supposed to have healed Germany. Refreshed, reinvigorated and under a new coaching setup, they seemed to have done away with the staleness that had settled in. The infusion of new blood with some older heads reinstated under Hansi Flick had been revitalising and they arrived for the World Cup in Qatar having lost just once in their last 16 games.

But the demons of Russia don’t seem to be going away. Then, as holders, they’d limped out of the World Cup at the group stage; the imagery of Neuer scrambling to get back into his box as Son Heung-Min raced away to score and seal a famous win for South Korea and hammer the final nail in the holders’ coffin is still fresh.

Facing another East Asian side at the 45,000-capacity venue in the heart of the Qatari capital, Germany had started brightly but got a scare when Japan had the ball in the back of the net in the eighth minute, only to see that being ruled off-side.

Gonda was keeping Japan in the game, repelling shots one after the other but it was his error that saw Germany take the lead. Just past the half-hour mark, Gonda tried to collect a ball in the box but in doing so, he brought down David Raum.

“He fell without much contact,” said Gonda, who was named player of the match, although he did not have any complaints about the referee’s decision.

Ilkay Gündo?an stepped up from the spot and once they had the lead, Germany came in waves and waves at the Japanese goal but had nothing to show.

“We had good opportunities to score after we got the opening goal but I think that Japan were very efficient,” said a despondent Flick. “We have to avoid those mistakes, we have to do better. We have an important game coming up against Spain and we have to bounce back from this.”

Germany’s campaign in Russia unravelled after they fell to Mexico in their opening game. Flick brushed off suggestions that this defeat in any way resonated with that game four years ago. What reverberated through the Khalifa Stadium, though, was Japan’s boundless energy — one that Flick wished his side had shown.