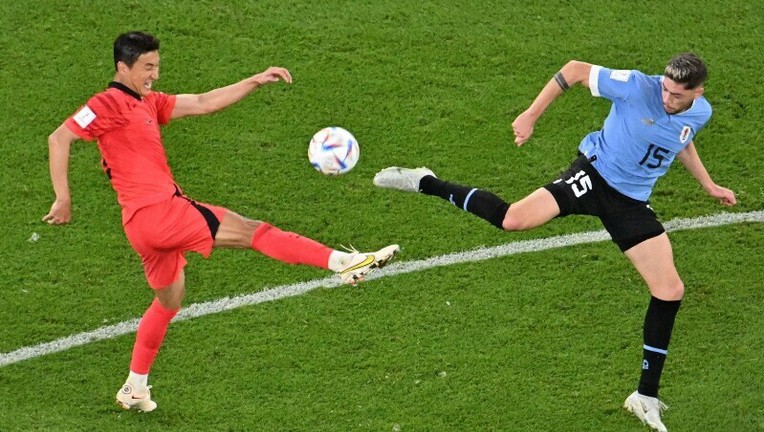 Uruguay have this certain appeal; a tenacious, battle-hardened team led up front by the chomping, hand-balling Luis Suarez. Remember him? A prolific scorer of stunning goals, a serial winner, he’s had his moments of notoriety at World Cups; a handball — not as celebrated as Diego Maradona’s ‘Hand of God’ — that prevented a winner for Ghana in 2010 and followed that up by taking a bite off Italy’s Giorgio Chiellini four years later.

The focus at this World Cup in Qatar has been so heavy on Cristiano Ronaldo and Lionel Messi that it has overshadowed the fact that Suarez, one of their contemporaries, is also very likely playing his last finals. Suarez remains a fierce competitor.

Just months before the World Cup, his career in Europe having come to an end after trophy-laden stints with Barcelona and Atletico Madrid in Spain, the 35-year-old fired Nacional to the Primera Division title in his homeland.

Against South Korea on Thursday at the Education City Stadium, the facade of which comprises triangles that play the suns rays in all directions, Suarez started at the top of a three-man attacking trident with up-and-coming stars Darwin Nunez and Facundo Pellestri, the ones Uruguay will look to build their future on once Suarez calls it a day.

Qatar is the Last Dance for the likes of Suarez, his longtime strike partner Edinson Cavani — who was on the bench, as well as defensive bulwarks Diego Godin and Martin Caceres. With the arrivals of Nunez and Pellestri, Suarez and Cavani don’t share the pitch as often as they did in their prime. Cavani only came onto the pitch as Suarez’s replacement at the hour mark.

Cavani, the gangling, long-haired marksman, was Uruguay’s best player at the last World Cup in Russia. His majestic brace against Portugal sent Uruguay into the quarter-finals but after he was ruled out due to injury, they crashed out to eventual champions France.

In a game of few chances for both sides — Godin coming the closest to breaking the deadlock when his header bounced off the inside of the post near the end of the first half, Cavani had been summoned to provide his side with the cutting edge. He couldn’t.

Nor could Son Heung-Min, South Korea’s talisman playing with a face mask because of a fractured eye socket. Son and his South Korean team-mates had seen their Asian rivals Saudi Arabia and Japan pull off stunning wins over the more illustrious Argentina and Germany in the last 48 hours at this World Cup and they certainly weren’t lacking in ambition.

They started with energy and had a few chances, Hwang Uijo blazing over with the goal at his mercy midway through the first half. Son, though, could’ve won it in the closing minutes for his side, just moments after Valverde had left the frame of the Korean goal shuddering with a long-range missile.

Uruguayan goalkeeper Sergio Rochet made a hash of a clearance, inadvertently passing the ball to Son whose shot from outside the box flashed wide as the opening game of Group ‘H’, which has Portugal and Ghana as the other teams, finished goalless.