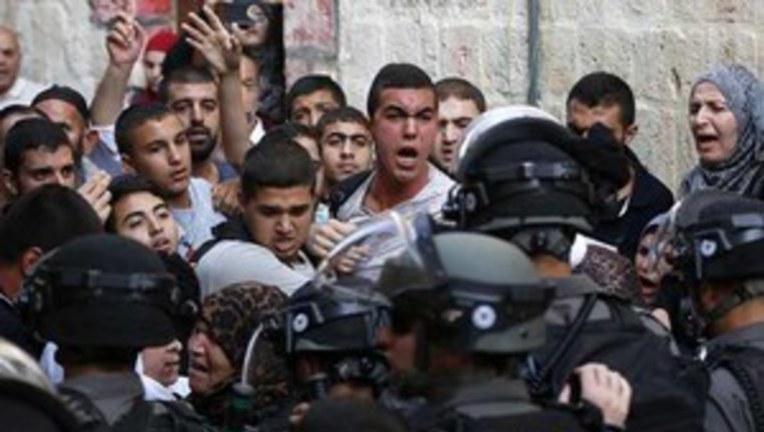 As they had the day before, Israeli security forces entered the compound early on Monday to prevent Muslim youths from harassing visiting Jews, police said.

Clashes then broke out on the hilltop complex, with booms heard from outside its gates.

Muslims have barricaded themselves inside Al-Aqsa amid protests over access to the site, venerated by Jews as the Temple Mount.

"As the police entered the compound, masked youths fled inside the mosque and threw stones at the force," a police statement said.

Police said that five protesters were arrested in the compound and visits went ahead as planned.

Another four were arrested in skirmishes between security forces and protesters in the surrounding alleys of Jerusalem's Old City.

Police fired stun grenades while hitting and kicking demonstrators and journalists as they sought to push back crowds.

Muslim protesters fear Israel will seek to change rules governing the site, with far-right Jewish groups pushing for more access to the compound and even efforts by fringe organisations to erect a new temple.

Israeli Prime Minister Benjamin Netanyahu has said the status quo will be preserved at the sensitive site, but suspicions remain among Palestinians, a sign of the deep mistrust between the two sides.

Non-Muslims are allowed to visit the compound, but Jews must not pray or display national symbols for fear of triggering tensions with Muslim worshippers.

"Some of the young men have been sleeping inside the compound for two or three days to defend it," Umm Mohammed, a 50-year-old among dozens of women protesting outside the gates of the Al-Aqsa compound, told AFP.

"We are protecting Al-Aqsa. We are not terrorists." An AFP journalist outside the gate saw a Jewish visitor leaving the compound scuffle with Muslims outside.

Non-Muslim visits to the site increase during Jewish holidays, with some 650 visitors on Sunday, according to police.

His office said the Murabitat and Murabitun groups were "a main factor in creating the tension and violence" at the compound.

In clashes on Sunday, Muslim witnesses said police entered the mosque and caused damage. Police said only that they closed its doors to lock in rioters throwing stones, fireworks and other objects.

Israeli security forces have used the same tactic in the past to restore calm and which has seen them briefly enter the mosque.

Palestinian president Mahmud Abbas condemned Sunday's raid, saying sites such as Al-Aqsa constituted a "red line" and adding that "we will not allow attacks against our holy places."

Netanyahu however said "it is our responsibility and our power to act against rioters to allow freedom of worship at this holy place."

He said Israel would act "to maintain the status quo and order" at the compound.

Israel seized east Jerusalem, where Al-Aqsa is located, in the Six Day War of 1967 and later annexed it in a move never recognised by the international community.