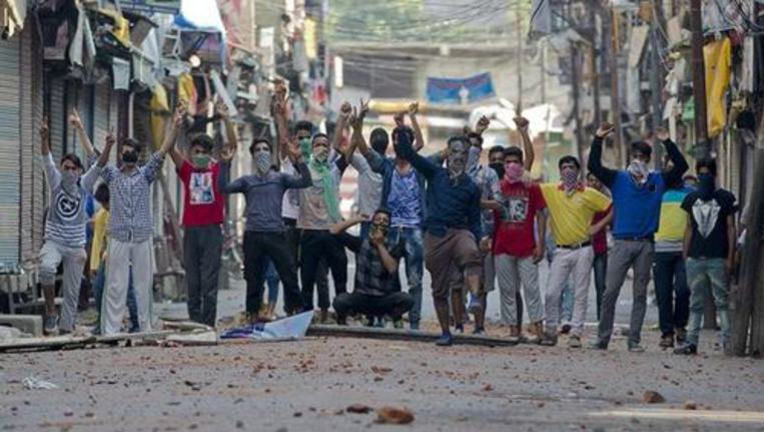 SRINAGAR: His apples are ripe for plucking but Abdul Shakoor is resigned to this year's crop becoming another victim of a 50-day explosion of violence in India-held Kashmir that shows no sign of abating.

"My main crop will be ready soon for harvest but buyers from outside are nowhere to be seen," said Shakoor, who runs an orchard in the Himalayan territory's southern town of Shopian.

"We had a meeting of growers recently and we ended up pledging that we would be willing to forgo this year's harvest in solidarity with the separatist cause."

The rose-red apples are one of the divided region's most famous exports, both an economic mainstay and symbol of its lush beauty and fertile soil.

But as summer draws to a close, this year's crop is doomed to rot given the general shutdown since the army shot dead a charismatic militant on July 8.

In the backlash over Burhan Wani's shooting, 66 civilians have been killed, many while defying a sweeping curfew to join banned protests.

Two members of the Indian security forces have also been killed, making it the deadliest chapter in Kashmir's troubled history since a similar spike in 2010.

Schools, shops and most banks remain shut, and normal economic activity has been paralysed.

Residents say the region feels more like a prison than the "paradise" that Prime Minister Narendra Modi evoked recently.

Since Modi's Hindu nationalist government came to power in 2014, there had only been sporadic violence but tensions have never been far from the surface in the only Muslim-majority state under Indian control.

Modi has spoken of his "pain" at the violence and on Thursday dispatched one of his top lieutenants to Kashmir's capital.

"Do not question our understanding of the situation... We know what the problem is, and we'll find a solution," Home Minister Rajnath Singh told reporters in Srinagar. Modi has laid much of the blame for the unrest on Pakistan.

While the India-held part of Kashmir has guarantees of autonomy, Modi's Bharatiya Janata Party is officially committed to scrapping that section of the constitution and critics say its stance is exacerbating tensions.

The BJP is now part of a coalition government in Kashmir, performing strongly in last year's state elections in areas where the state's Hindus are concentrated.

"New Delhi has reneged on its commitments by whittling down the autonomy," former chief minister Omar Abdullah told an AFP reporter.

Despite the government's talk of wanting to restore peace, thousands of security reinforcements have been sent to the region in the last few days, some setting up camp in schools that have been closed.

"Without any political initiatives it's all coming down to us. And what we do has its own consequences," a senior army officer told AFP on condition of anonymity.

A top police officer, who was not authorised to speak to the media, said a "brutal suppression" was likely.

"For the first time the militants and the public are on the same page. It is a deadly mix."

There is already deep anger about the security forces' routine use of crude pump-action pellet guns which spray blinding metal shards to break up protests.

The guns are meant to minimise fatalities in protests although the law gives the armed forces a relatively free hand to use lethal force, especially against suspected militants.

Read: In Kashmir, the young are paying for India’s lack of vision

Many of the 66 killed are students, such as Amir Nazir, who was on a visit from his university to his home town of Bijbihara when he was shot by police chasing a group of protesters.

"No constitution in the world can justify my son's killing, but we have seen such deaths regularly in Kashmir," said Amir's father Nazir Ahmed Lattoo. "It's state terrorism."

Hospital authorities say they have treated at least 500 patients with eye injuries caused by pellet guns, many of whom will never recover full vision.

The economic cost is hard to boil down to figures but some estimates put the cost to the local economy at one billion rupees ($15 million) every day.

As well as its impact on agriculture, the unrest has devastated the tourist industry, with many of Kashmir's famous houseboats lying empty on Dal Lake at the height of the summer season.

The shutdown has evoked memories of the 1980s when India-held Kashmir became one of the world's most militarised zones as the army sought to crush a mass uprising.

Rights groups say 70,000 people were killed in the fighting and thousands more disappeared after being taken away by security forces.

The intervening years may have been calmer but former CM Abdullah said the army's tactics can only exacerbate the ongoing crisis.

"You have youngsters who are lying injured in hospitals today whose only demand is that if I can get out of here, lay my hands on a weapon," he said.

"It is almost like the fear that had set in about joining the ranks of militants, that has completely evaporated."