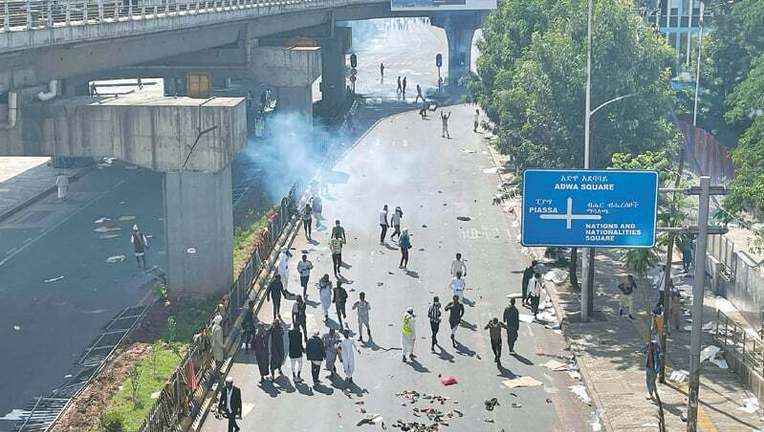 The incident occurred outside the international stadium in the heart of the capital, where prayers were scheduled to celebrate the Eidul Fitr holiday.

Unable to gain access because the stadium was full, some worshippers began to pray outside, in Meskel Square.

A member of the Addis Ababa High Council of Islamic Affairs told details about what happened next were sketchy.

Volunteers at the scene, he said, reported that a policeman accidentally fired a round of tear gas at the crowd, triggering a confrontation and “the situation became uncontrollable”.

His organisation later issued a statement saying “the unrest was not a problem that happened between Christians and Muslims.”

Nor, the Council said, was the unrest “connected to the government, as some entities are trying to do.” Addis police issued a statement saying “a riot” had been caused by a “few individuals” and led to property damage, but order had now been restored.

“Police are calling on the community to remain calm,” it said, adding that it would inform the public later about the cause of the disturbance.

At least 20 people were killed on Tuesday in Gondar, a town in the northwestern region of Amhara, when Muslims were attacked at a funeral by heavily-armed “extremist Christians”, an Islamic group there says.

The region’s security authorities said on Friday that 373 people had been arrested.

In a statement issued after the disturbances in Addis, the government accused “historical enemies” of Ethiopia whom it did not name, of seeking to “enact their malicious aim” on Eidul Fitr.

“(Their) plan has failed, through the joint effort of the peace-loving (Muslim) faithful,” the statement said, adding that there was “some medium damage” to property as well as injuries among security forces,” it said.

The Addis Islamic official said Eidul Fitr prayers had taken place every year since the end of the Marxist-military Derg regime in 1991.

“This is the first time such incidents happen,” the official said, adding that the Muslims attending the ceremonies were unarmed, as everyone was searched by police before they entered the venue.

“Muslims want this festival to pass in peace,” the official said.

A country with a large mix of ethnicities, Ethiopia is majority Christian — of whom the most numerous are members of the Orthodox church — while around 30 percent of the population are Muslim.