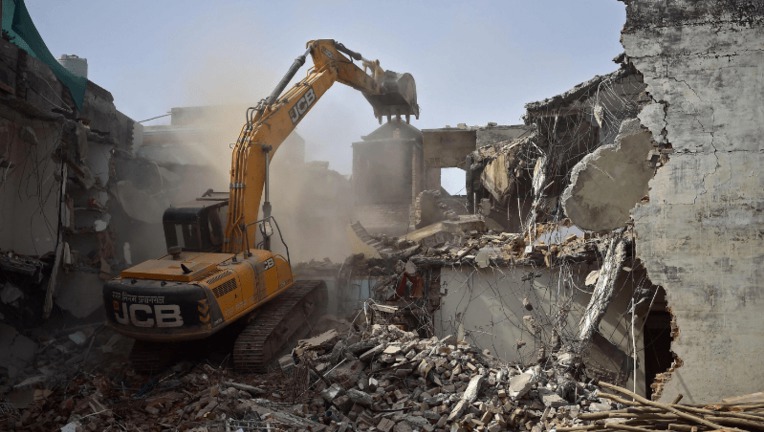 After two nights in police custody, Indian teenager Somaiya Fatima was released in time to watch live footage of an excavator claw smashing into the walls of her childhood home.

The residence is among scores of dwellings and businesses flattened by wrecking crews this year, in a campaign authorities have promoted by turns as a battle against illegal construction and a firm response to criminal activity.

But rights groups have condemned “bulldozer justice” as an unlawful exercise in collective punishment by India's Hindu nationalist government, and many of the campaign's victims have one thing in common.

“We are Muslims and that's why we are being targeted,” Fatima told AFP.

The 19-year-old was arrested along with her family after her father was accused of masterminding a large public protest in the northern city of Allahabad last month.

It was one of several rallies across India last month condemning a ruling party spokeswoman whose provocative comments about Prophet Muhammad (Peace Be Upon Him) during a televised debate sparked anger across the Muslim world.

The day Fatima was released, she was sitting in a relative's living room when she came across footage of her home's destruction on her phone.

She said the demolition was a lesson for Muslims tempted to “speak up” against the government.

“They've instilled fear in an entire community,” she said. “Everyone now looks at their home and thinks that if it happened to us, it can happen to them also.”

In office, he has championed the bulldozer as a symbol of his commitment to law and order and as a potential tool to use against “trouble-makers”.

Adityanath's acolytes celebrated his successful campaign for re-election as chief minister earlier this year by riding on top of excavators, while bulldozer tattoos became a minor craze among supporters of the ruling Bharatiya Janata Party.

Since then “bulldozer politics” have spread elsewhere in the country and demolition campaigns have begun quickly following on the heels of outbreaks of religious unrest.

After a violent confrontation in April between Hindus trailing a religious procession and Muslims holding Ramzan prayers, authorities in Delhi knocked down nearly two dozen Muslim shopfronts and the facade of a mosque, defying a court order to stop.

Officials say the spate of demolitions are lawful as they only target buildings constructed without legal approval.

But victims of the campaign deny that their dwellings are illegal, and say they are not given the legally required notice period to dispute demolition orders.

Read: From Babri to Gyanvapi, how India’s courts have helped escalate Hindutva claims on mosques

Fatima's house was demolished “in the presence of hundreds of police and hundreds of cameras, with no empathy,” KK Rai, a lawyer for Fatima's father, told AFP.

“There is no comparison for this ruthlessness.”

Critics of the government say the campaign is the latest manifestation of the BJP's discriminatory policies towards India's 200 million-strong Muslim minority community.

“They have an ideological commitment that in India they have to make Muslims a second-class citizen, socially humiliate them and destroy their property,” Rai said.

Amnesty International said last month that the demolitions were part of a selective and “vicious” crackdown on Indian Muslims who dared to speak up against the discrimination they faced.

Many Muslims living in Uttar Pradesh now fear their own homes are being earmarked for destruction after their family members participated in last month's protests.

“Now we have sleepless nights and restless days,” said Mohammad Javed, a resident of Saharanpur, who received an order to vacate his house soon after his brother was arrested for joining a demonstration in that city.

One week after Fatima's arrest, a bulldozer remained parked outside the police station near where her home once stood.

The pile of bricks and concrete in its stead has heightened her own sense of belonging to a pariah community.

She recalled watching her home being torn down on a news channel's YouTube livestream, as her phone screen filled up with a flood of comments from the public praising the demolition.

“I was born there and spent my entire life there,” Fatima said. “But it was evident that people were happy seeing someone's house being destroyed.”